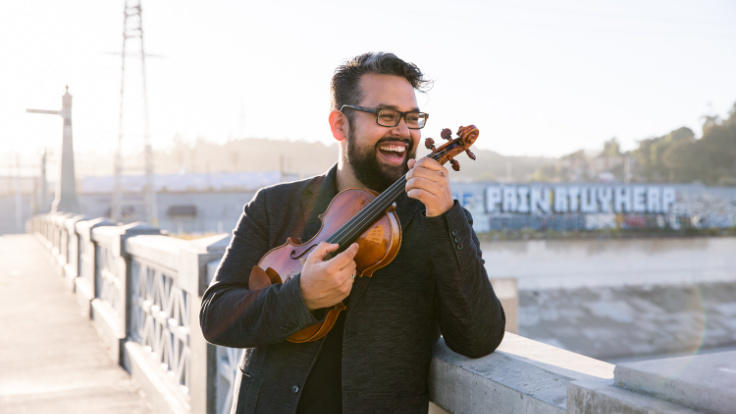 Learning to Transcend Our Vision of Each Other Through Music

How Can Music Act as Medicine?

The work of the citizen and the artist is one, says Vijay Gupta: to make sadhana—a daily practice—of the world we envision. Hailed by The New Yorker as a “visionary violinist” and “one of the most radical thinkers in the unradical world of American classical music,” Gupta creates spaces of wholeness and belonging through his work. His album When the Violin was created during quarantine as a means of transforming our collective pain into a restorative, healing narrative. After a time of crisis, he shows us creative ways to revitalize our sense of hope and belonging.

“A master of music and medicine.”

Gupta is the founder and Artistic Director of Street Symphony, a community of musicians creating spaces of connection for people in reentry from homelessness, addiction, and incarceration in Los Angeles. He is also a co-founder of the Skid Row Arts Alliance, a consortium dedicated to creating art for—and with—the largest homeless community in America. For his work in “bringing beauty, respite, and purpose to those all too often ignored by society,” Gupta was the recipient of a 2018 MacArthur Fellowship.

A riveting speaker, Gupta has shared his work with dozens of corporations, campuses, conferences, and communities across America over the past 10 years, including The Aspen Institute, Mayo Clinic, US Psychiatric Congress, American Planning Association, and the League of American Orchestras, to name a few. He recently delivered the 33rd annual Nancy Hanks Lecture on Arts and Public Policy—a lecture previously given by Yo-Yo Ma and Maya Angelou—where he was introduced by the Honorable Speaker Nancy Pelosi. To date, his TED Talk, “Music is Medicine, Music is Sanity,” has garnered millions of views.

Gupta has performed as an international recitalist, soloist, chamber musician, and orchestral musician for over 20 years, playing his solo debut with the Israel Philharmonic Orchestra under the baton of Zubin Mehta. He was a member of the first violin section of the Los Angeles Philharmonic for 12 years, and has collaborated with the Kronos Quartet, the Philharmonia Orchestra of London, and Yo-Yo Ma. Gupta also appears regularly with the Strings Festival in Steamboat Springs, Colorado. A dynamic recording artist, Gupta recently released Breathe, an album of the piano chamber music of Reena Esmail, under his own label. His solo album When the Violin, also recently released, featured the music of Esmail, J. S. Bach, and Esa-Pekka Salonen.

Gupta currently serves as the Senior Artistic and Programs Advisor for Young Musicians Foundation. He holds a Bachelor’s degree in Biology from Marist College, and a Master’s in Music from the Yale School of Music. His principal teachers have included Ani Kavafian and Glenn Dicterow. Gupta plays a 2010 violin made by Los Angeles-based luthier Eric Benning, and can be found on Instagram @guptaviolin.

“Wonderful! Moving, evocative, thought-provoking, inspirational. It is this kind of presentation that moves people to action.”

“Vijay was a sheer delight. He was not only an incredible storyteller/entertainer/inspiration, he was flexible and easy to work with. I don’t know how to talk about his joining the Nashville Symphony and becoming a part of our community here, but I’m scheming about it!”

“[We were so thrilled to] meet the amazingly talented, delightful, and inspirational Vijay Gupta. I have already had emails from Texas Tech Music faculty thanking me for the wonderful evening. One man told me last night that it was the best event he had ever attended on the Tech campus. We over-use the word “brilliant” nowadays, but in Vijay’s case, it fits. Thank you!”

Despite the chaos and turmoil of 2020, it offered us a much-needed invitation to reflect on the kind of world we want to live in. We’ve seen a reevaluation of what is essential in our societies; a renewed discovery of the value of deep, creative work; and a greater appreciation balancing solitude and our connection with the world. Businesses, too, have been offered a chance to rethink not only how they operate, but how they can connect with their employees in a more meaningful way. Helping them reimagine everything from leadership to creativity, are artists like Vijay Gupta.
In his powerful and eye-opening talk, Gupta—a world-renowned violinist—applies his experience in musical performance, education, and community engagement, including 10+ years of managing his non-profit Street Symphony, to the corporate world. His unique background helps leaders, managers, and executives at all levels answer some of their most burning questions. How can we transition from a top-down model of leadership, into one that follows the artistic tradition of decentralization and collaboration? How can we continue to seek excellence and achievement in our work without losing sight of our greater purpose? And how can we create spaces of belonging in the workplace, allowing people to show up as their most authentic selves?
Complete with a musical Q&A session, this one-of-a-kind talk shows leaders how they can build the type of trust that allows creativity and innovation to emerge.
Activism & Humanitarianism

Heal Yourself, Change the World A Musical Conversation with Vijay Gupta

Through grief, loss, and collective trauma—how do we begin to heal ourselves and create the post-COVID world? For celebrated violinist and social justice advocate Vijay Gupta, the answer unsurprisingly begins with music. At his nonprofit Street Symphony, Gupta uses music to show us the power we have to heal ourselves, inspire others, and provoke meaningful change. And by moving away from a hierarchical “outreach” model, and into one of collaboration and engagement, he helps facilitate experiences of mutual reciprocity, wholeness, and belonging.
Today, Gupta works tirelessly to inspire citizen artistry across America and around the world. This spontaneous and engaging talk not only offers a real-time musical exploration with Gupta, but the building blocks for transforming our own communities—gleaned from years of on-the-ground experience working with some of societies’ most vulnerable populations. Change starts small, says Gupta. It can begin with something as simple as a daily artistic practice, a creative habit. But over time, that small commitment to our creativity will blossom and ripple through our communities in a way that connects us to our greater humanity.
As Gupta says, “With every breath, every brush stroke, every word, every note, we cast a vote for the future we want to create.” Compassionate and courageous, this talk is essential listening as we begin to build the new world we want to live in.
Mental Health

The Medicine of Music

In this talk, Vijay (Robert) Gupta explores the connection between music and mental health, explaining why music’s redemptive power may hold more potential than we realize. Gupta draws from his work as director of Street Symphony—a musical engagement non-profit—to illustrate how music can help bring people back from the brink of their darkest times. How does music speak to people in ways language cannot? Why is music education vitally important, especially to those who are most in need? Erudite, eloquent, and passionate, Gupta shows audiences that music isn’t just something to be enjoyed—it's something that can change lives.

Why Music Education is Essential

Vijay Gupta believes strongly that music should be a fundamental element in an educational curriculum, beyond an extracurricular hobby or even a medium to facilitate instruction in other fields, such as math or science. In this talk, he shares his personal journey in music education, tying in his experiences as a young musician struggling to find the meaning in music with the lack of programs and support, as well as the stigma he faced at choosing between a career as a “responsible person” in science and a career in his life’s passion, music. That stigma still exists around music and the arts. Gupta believes music educators are true pioneers in the kind of human education that will shape the kind of empathic and compassionate socially connected lives that our world demands of our young people. Music gives us these human tools, says Gupta—the relational discipline grounded in passion that truly can affect change in the world around us.

Top violinist taking classical music behind bars and to the streets

At 20, his experiences reach far beyond his years

Get to Know Lavin’s MacArthur “Geniuses”!

This year Titus Kaphar and Vijay Gupta join a whopping SIX other Lavin Speakers in receiving...

Violinist and educator Vijay Gupta has just been named by the MacArthur Foundation as one of their...

Motivate your employees. Reduce your carbon footprint. Run a marathon. January is the month we want...

In the January 1 issue of The New Yorker, music critic Alex Ross writes about “visionary Los...

In lieu of giving holiday gifts this year, The Lavin Agency is making donations to two organizations...

In lieu of holiday gifts this year, The Lavin Agency is making donations to two organizations we...

According to the Los Angeles Downtown News, (Robert) Vijay Gupta is "The Most Interesting Man in the...

Lavin is pleased to represent some of the most fascinating TED fellows around—speakers who are, as...