A digital world comes with digital dangers—here’s how to protect ourselves and our rights. 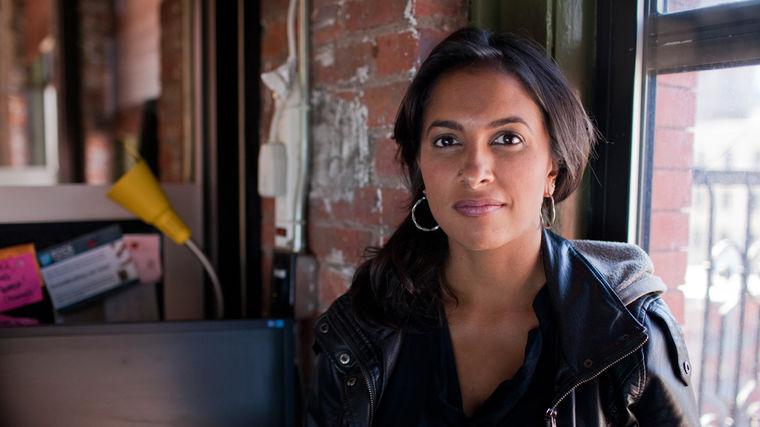 What happens to human rights when we let technology encroach on our social systems? Award-winning documentary director Shalini Kantayya explores the intersection of technology and humanity, tackling questions of innovation, ethics and bias. How should we deal with bias and security issues on our social media platforms? Kantayya’s newest film TikTok, Boom. investigates TikTok’s algorithm and users to paint a picture of the world’s most downloaded app, and how we can wield it more safely and ethically. Her previous film Coded Bias reveals the deep-seated biases behind our computers, illuminating unasked questions about prejudice in tech—Vice called it “the most important film about AI you can watch today.”

“Kantayya masterfully takes material that in other hands might become dry and academic and turns it into something cinematic.”

As technology improves at a whirlwind pace, questions of ethics and safety seem to go unanswered. With care, nuance and integrity, award-winning director Shalini Kantayya investigates these questions through a critical lens, uncovering the opportunities and dangers behind the code and looking ahead to the future of tech. Her newest documentary TikTok, Boom investigates hot topics like geopolitics, data privacy, censorship and social justice activism—wrapped up in the fascinating personal stories of three Gen Z influencers and an array of expert opinions. Kantayya captures the thrills and challenges of living in an internet-oriented landscape, demonstrating that social media is a powerful force for good if we can learn to wield it well.

Her previous critically acclaimed documentary Coded Bias reveals that machine-learning algorithms—intended to avoid prejudice—are only as unbiased as the humans and data sets programming them. Praised by The New York Times as “the most cleareyed of several recent documentaries about the perils of Big Tech,” the film follows the young Black women data scientists at MIT who found that AI facial recognition was biased against Black skin, which led to a deeper worldwide investigation about bias, race, ethics, social justice, and technology.

TikTok, Boom The Who, What and Why of the Huge Social Media Platform

TikTok’s grip on young people is impossible to ignore—its bite-sized videos and uncannily accurate algorithm guarantee it a spot on the list of most influential internet platforms. But behind the addictive scrolling and viral dances, how much do we really know about the social media giant? In this eye-opening talk, director Shalini Kantayya teaches us about TikTok’s intricacies, advantages and pitfalls. Drawing on her 2022 documentary TikTok, Boom, which explores TikTok through the eyes of experts and young content creators, Kantayya dives into the issues surrounding the platform with nuance instead of condoning or condemning it. This talk is a fascinating, insightful examination of the way technology and entertainment interact and affect us, putting a human face on issues of privacy, culture, politics and more. Kantayya enables us to be more thoughtful about the way we use the internet, and to use social media more effectively and ethically.