Canada is a nation worth loving—and ranting about. 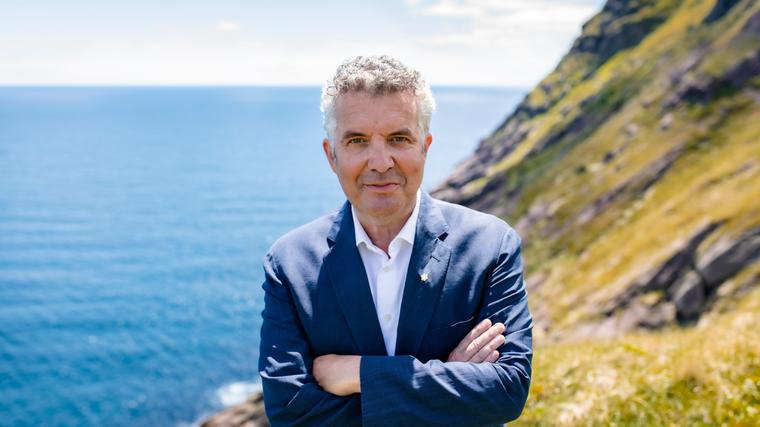 Rick Mercer chronicles, satirizes, and ultimately celebrates all that is great and irreverent about this country. A national #1 bestselling author and the Governor General’s Award-winner for Lifetime Artistic Achievement, Mercer is our most popular comic: a political satirist who knows exactly what matters to regular Canadians and what makes them laugh. The beloved comic won the Stephen Leacock Medal for Humour for his new memoir Talking to Canadians, in which he charts his meteoric rise to TV fame in a series of riveting, hilarious, and unforgettable anecdotes and behind-the-scenes revelations from his decades-long career.

Rick Mercer’s top-rated, award-winning CBC show, The Rick Mercer Report, routinely trampled even its American competitors in the ratings. The show featured Mercer’s trademark rants, satirical newscasts, commercial parodies, and comic encounters with famous Canadians. More than any other comedian (or journalist for that matter), he talks to Canadian newsmakers with a refreshing candour, and is uniquely able to spin topical hilarity from the people and things deeply embedded in the national consciousness. Mercer has won over 25 Gemini Awards for The Rick Mercer Report, Made in Canada, and This Hour has 22 Minutes. He also starred in Rick Mercer’s Talking to Americans, which attracted attention across North America, was watched by millions, and remains the highest-rated comedy special in Canadian history.

Mercer won the 2022 Stephen Leacock Medal for Humour for his memoir Talking to Canadians, in which he tells his own story for the first time—with the same biting wit that endeared him to the nation. It has been described by legendary author Margaret Atwood as a “funny, pitfall-strewn, no-holds-barred memoir from the ranting TV uproarist, edge-walker, envelope-pusher, and pot-stirrer.”

His earlier book, Rick Mercer Final Report, a #1 Toronto Star and Globe and Mail bestseller, brought together never-before-published rants from the last five seasons of his show, plus a selection of the very best rants from earlier years. Throughout the book, in a series of brilliant essays, Mercer shares his hilarious, moving, and at times hair-raising memories from the course of the show. Mercer is also the author of four national bestsellers, Rick Mercer Final Report, Streeters, The Rick Mercer Report: The Book, and A Nation Worth Ranting About.

In 2019, Mercer won the Governor General’s Award for lifetime achievement, which recognizes artists who have made an indelible contribution to Canada and the world’s cultural life. He is an Officer of the Order of Canada.

“In short, Rick was AMAZING. The clip was awesome, exactly what we had hoped for, and struck all of the right notes. We’ve received some terrific anecdotal feedback from graduating students, admin, and guests who watched. One of my favorite comments came from a graduating student who didn’t grow up in Canada. She indicated that while she didn’t know Rick, she felt like he was speaking to her, and took something away from his keynote. It was perfect, and thank you for helping us to secure it!”

The University of British Columbia
Testimonials

“Rick, of course, brought the house down! They were on their feet for him the minute his entrance music started and hung on to every single word he said. And he was an absolute pleasure to work with on-site. Can’t say enough good things about him.”

“Rick Mercer was a hit with our membership and he put on a great performance for us. I’m not sure I’ve laughed that hard at one of our events before. It was wonderful speaking with Rick after his presentation and having him mingle with our membership for a good hour after the event—that was a nice bonus. Thank you again for your help to secure Rick for our event.”

“Rick Mercer opened the March Classic 2019 and we could not have asked for a better way to begin the day. He brought some fantastic memories, many laughs and a good-sized serving of Canadian pride to our event. Rick was wonderful to work with throughout the entire morning and I would definitely recommend any conference celebrating all that is wonderful about Canada, look to Rick Mercer as a speaker.”

“Rick was a big hit with the audience! He was also very gracious during the meet and greet and a real pleasure to work with onsite.”

“In terms of his performance—it was amazing. Our guests absolutely loved it. Everyone came out feeling positive, laughing, and feeling very proud to be Canadian. We were so happy with Rick and would highly recommend him to anyone.”

“Rick Mercer, as always, was spectacular. Not only was his show fantastic, more importantly, all acts should take a lead from him on how to be a gracious professional! This is our third or maybe fourth time presenting him-and it is always a pleasure. We have a reception at the end of the show that Rick attends, and once again he was the last one to leave. Always a smile, time for a chat and a pic, relaxed and in no hurry, with everyone who came up to him. A genuine class act, and a great representative of what it means to be Canadian.”

“Rick was phenomenal to work with and probably one of the most down to earth Canadians ever. He engaged our audience with hilarious anecdotes and some scenes from The Rick Mercer Report and kept the room in stitches for a solid hour and a half.”

Talking to Canadians Real Stories from Canada’s Most Beloved Comic

Keen eye, sharp tongue: Rick Mercer is one of our funniest political satirists. But who is the inspiring man behind iconic shows like the Rick Mercer Report, and what can he tell us about how to live our best lives?
For the first time ever, Rick tells the story of his road to stardom, bringing his bestselling memoir Talking to Canadians to life on stage and sharing unforgettable stories from his youth, his days as an aspiring actor, and his years as a hilarious national treasure.
It’s heartfelt, funny—and in true Mercer fashion—totally unabashed.

A Nation Worth Ranting About

Why I rant. And why you should too.

In Talking to Canadians, Rick Mercer finally turns the spotlight on himself—revealing how he went...

The last time Rick Mercer hosted the iconic comedy showcase was a whopping 16 years ago. On October...

On the morning of the eve of his final show, beloved reporter and satirist Rick Mercer joined host...

"The rants are the part of the show that’s completely personal because I write the rants myself,"...

Rick Mercer is wearing pink today. While the celebrity speaker and host of the Rick Mercer Report...

It looks like celebrity speaker and television host Rick Mercer is going to have to clear out some...

Rick Mercer: Why He Loves His Job & Being A Political Satirist [VIDEO]

"I would be a fool not to be excited to go to work everyday," Rick Mercer says in a new interview. "...

There are few YouTube videos, aside from those by Justin Bieber and Lady Gaga, perhaps, that have...

Celebrity speaker Rick Mercer, master of the rant, might have a bone to pick with anyone who thinks...

a nation worth ranting about

"I always liked politics as my sport," celebrity speaker Rick Mercer says in a new interview on the...

Linda Besner, of Hazlitt Magazine, recently likened the art of ranting to "verbal jazz."  It's no...

"The danger in not ranting is dire," Rick Mercer warns in a recent Maclean's article. The celebrity...

“A good rant is cathartic,” Rick Mercer writes in the forward of his new book, A Nation Worth...

Rick Mercer recently took to The Rick Mercer Report to talk about “the best high school in Canada,”...

“The state has no business in the hard drives of the nation,” Rick Mercer said on his top-rated Rick...

Rick Mercer's a funny man, but underneath the hilarity is an ever-present keen ability to hold a...

Diverse perspectives in the workplace make your ideas better, your teams stronger, and your company far more successful. Our top diversity, equity, and inclusion speakers don’t just show you how DEI can benefit you—they give you practical strategies for implementing true belonging in the workplace.