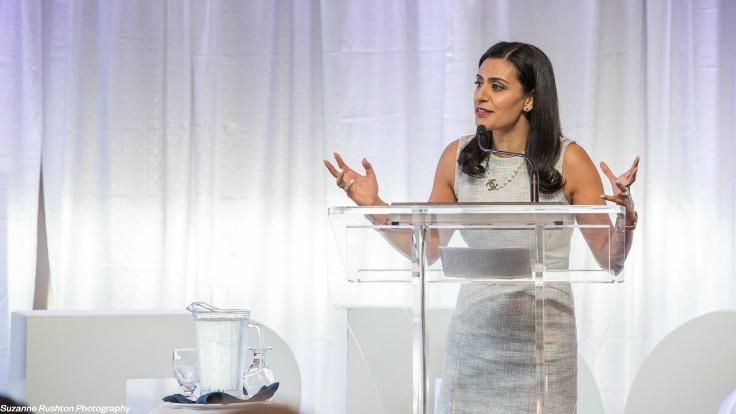 How Did Manjit Minhas Grow Her Business? (6:24)

Manjit Minhas shares business lessons with equal parts force and finesse. A judge on CBC’s Dragons’ Den for the past six years, Minhas also runs the 10th largest brewery in the world—earning an excess of 220 million dollars last year alone. Her unprecedented success in a male-dominated field demolished stereotypes, surprised competitors, and cleared a path for entrepreneurs of every age and gender. In talks, she distills the hands-on entrepreneurial lessons of her success, showing audiences how they can embrace change, defy expectations, and incentivize disruption.

Dragon’s Den celebrity judge Manjit Minhas has been able to do what few ever thought possible—break into the notoriously competitive and male-dominated beer and spirits industry. Minhas Breweries, Distilleries and Winery, which Minhas co-founded with her brother Ravinder, is now the 10th largest brewery in the world, producing over 90 brands of beer, spirits, liquor, and wine. She is now the sole owner, President, and CEO of the company, which has served over 7 billion pints of beer to date. With sharp strategy and keen understanding of the market, Minhas has been able to break down traditional barriers and turn her small business into an empire. Originally trained as an engineer, Minhas is now a specialist in brand development, marketing, sales, and retail negotiations.

Minhas purchased the second oldest brewery in the United States and renamed it The Minhas Craft Brewery, officially making her the youngest brewery owner in the world. She also opened The Minhas Micro Brewery, which make world-class craft beers and specialty beers, such as a gluten-free options for people with Celiac disease. With her background in engineering, Minhas strives to minimize the environmental impact of her company, producing beer using the least amount of cleaning and water treatment chemicals, gas, electricity, and water. She has created a special 48-can pack of beers for COSTCO which has the least amount of packaging materials compared to any other product in Canada or the US. It uses no plastic hi-cone rings and needs the least amount of box material, saving millions of pounds of packaging materials from ending up in the already over-filled landfills.

Minhas is the author of the book Brewing Up a Damn Good Story and has received many awards, including Canada’s Women Executive Network’s Top 100 Women Entrepreneurs, Profit’s Top Growth Entrepreneur, and Chatelaine’s Top Entrepreneur Woman of The Year. She’s been profiled in Maclean’s, The Globe and Mail, and The National, and was recently named one of Canada’s Top 40 Under 40, a distinction honoring outstanding Canadian leaders. In 2020, Minhas launched a show called The Manjit Minhas Podcast, which debuted in the Top 10 Podcast charts. In each episode, Minhas interviews successful entrepreneurs and CEOs about their journey, exploring their challenges, how they overcame them, and what listeners can learn from both their successes and failures.

“The Manjit Minhas keynote was, to sum it up in one word, phenomenal. When we announced Manjit as our speaker, we received such positive feedback from not only our students, but alumni, faculty, and staff. The excitement carried through Manjit’s keynote and afterwards, as many reached out to thank the Alumni Association for putting on this event. Our audience learned so much from Manjit. They felt she was not only inspiring and resourceful, but genuine and humorous too.”

“Manjit was very professional, and she responded to the keynote conversation in pure brilliance. Her responses to business issues and insights were spot on. She spoke the exact mind of many of the women, she nailed on each point in a sincere and open attitude. Manjit definitely knows her stuff and executed her role in a very profound manner. My organization would definitely bring her back.”

Manjit Minhas is well-known for her role as a judge on the critically acclaimed program Dragons’...