Through crime fiction, we can see the bright truth in our dark secrets.

Social Justice Comedian | Director of The Muslims Are Coming! | Author of How to Make White People Laugh 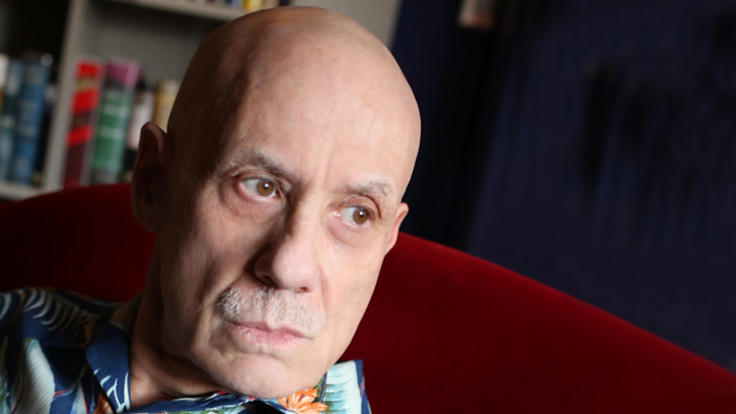 Self-described as the “Demon Dog” of American literature, James Ellroy is best known as the mind behind such legendary books as L.A. Confidential, The Black Dahlia, American Tabloid, and his most recent novel, Widespread Panic. The “Godfather of crime fiction,” Ellroy is the only crime writer to receive mainstream literary honors, including TIME’s Novel of the Year (for American Tabloid) and Best Book of the Year (for his memoir My Dark Places). Unconventional and beyond unpredictable, Ellroy’s talks are dynamic, dramatic dynamite.

“Ask me to name the best living novelist who’s fierce, brave, funny, beautiful, convoluted, and paranoid ... and it becomes simple: James Ellroy. If insanity illuminated by highly dangerous strokes of literary lightning is your thing, then Ellroy’s your man.”

Celebrated for his hard-boiled, jazz-inflected books, like the L.A. Quartet and the Underworld U.S.A. Trilogy, James Ellroy is a master of crime stories, intrigue, and mid-century gangland justice. In candid talks, he shares the historical inspiration behind his books and the literary tradition he’s made a home in. Hilarious and brutally honest, Ellroy offers a secret history of the mid-late 20th century; full of political and legal corruption. He explodes one of our greatest collective myths to expose that America has never been innocent. Leading audiences through tales of neon-lit American history, gossip, and the criminal element that inspires him, Ellroy’s talks are uniquely engaging: funny, frightening, and brilliantly told. In his latest novel, titled Widespread Panic, Ellroy tells the fictional story of real-life Hollywood fixer Freddy Otash: a rogue cop and private investigator working in 1950’s Los Angeles. Long before the Internet, the gossip rag Confidential delivered the dirt on movie stars, socialites, and politicians—all with the help of people like Otash, who was dubbed the “tattle tyrant” for his underground work exposing some of Hollywood’s biggest names. True to form, Ellroy’s Otash makes for a wildly entertaining protagonist, as he confesses to an unforgettable tale of corruption, paranoia, sin, and redemption. The Los Angeles Times writes, “[Ellroy is] the dean of Los Angeles crime novelists. . . . You come [to Ellroy] to roll around in the blood and the mud, to ping along to the plot twists and betrayals.”

Ellroy’s earlier novel, This Storm, which The Wall Street Journal calls “breathtakingly complex,” is the second volume of his Second L.A. Quartet.  The first volume, Perfidia, achieved international-bestseller status. The Second L.A. Quartet places real-life and fictional characters from Ellroy’s first two bodies of work in Los Angeles, during World War II, as significantly younger people. And like all of Ellroy’s work, it is uniquely ambitious, mysterious, and deeply satisfying. As for his keynotes: audiences are rapt as he delivers rapid-fire insights both vulgar and venerable—a train tearing down the tracks at break-neck speed. It’s impossible not to be swept up by his incredible candor, spontaneous quips and clever asides. He possesses a preternatural ability to swing from fervent, fever-pitch delivery to almost brooding solemnity without missing a beat. Whether discussing his impressive canon of writing, or fascinating personal life, Ellroy is truly a masterful storyteller, offering an unprecedented perspective both in writing and on-stage.

Ellroy Confidential Dispatch from the Master of the California Underworld

Whether fiction or non-fiction, every story that compels James Ellroy is lovingly, obsessively lifted from life. Ellroy is a chronicler of another time—an era of Raymond Chandler and Dashiell Hammett, steeped in Edward Hopper lighting. In Ellroy’s hands, the crooked cops and dauntless detectives of 80 years ago seem as present, and prescient, as the stories of today. A remarkable speaker, Ellroy’s talks are a mix of fact and fiction, drawing on his own dramatic rise to literary stardom with books like L.A. Confidential, and the characters (both real and invented) that delight and fixate him to this day. Audiences will be delighted, inspired, and transported to Ellroy’s noir universe—one they likely won’t want to leave.

James Ellroy, The Art of Fiction No. 201

James Ellroy, the prolific author known for the blockbuster novels L.A. Confidential and The Black...

James Ellroy is the canonized writer behind some of America’s most famous crime novels, such as The...