To build an antiracist society, we must first learn to see our shared humanity. 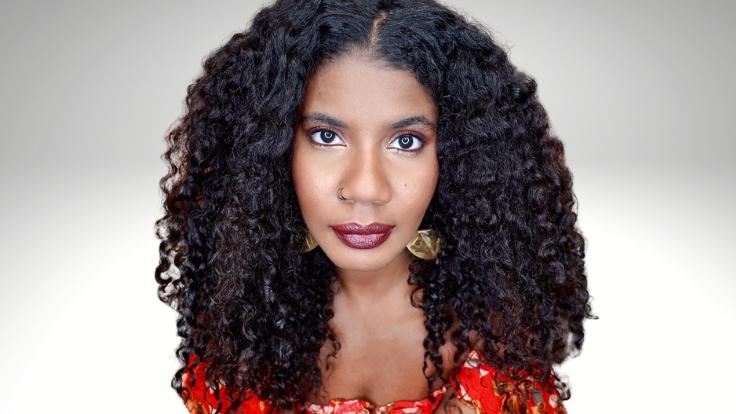 Acclaimed YA author NIC STONE is inspiring the next generation of social activists with her vivid and painfully timely novels. Her debut Dear Martin—a #1 New York Times bestseller taught in classrooms across the country—and its stunning sequel Dear Justyce, deftly explore themes of oppression, liberation, and race relations in America. With similar parallels in their work, Stone counts The Hate U Give author Angie Thomas among her many fans, calling Dear Martin a “must-read” and Stone’s writing “honest and gut-wrenching.” Stone’s oeuvre, which includes a Marvel series, enlightens her down-to-earth talks—leaving audiences empowered with the tools they’ll need in the fight for an antiracist society.

“Stone tackles the American juvenile justice system and its unjust persecution of Black boys in this gritty, powerful sequel to Dear Martin.”

Nic Stone was inspired to write at a young age—left wanting by the non-existence of people who looked like her in the books that she read. The lives of the few Black characters she encountered either served as sidekicks or plot devices, but failed to show their full complexity or humanity. Today, she can’t help wondering how different the world would be if this generation had grown up reading about Black people just being human. Racism has always been about dehumanization, Stone says. “The more we see Black people living—loving and doing and being and feeling...solving mysteries and being the heroes—the more we come to recognize our shared humanity.”

In addition to her New York Times bestselling books Dear Martin (which uses the lessons of Dr. King to tell a modern story of social justice for a new generation) and Dear Justyce, Stone is the author of Odd One Out, chosen as a Rainbow Book List Top Ten selection; Jackpot—a searing look at economic inequality; and Clean Getaway, a road-trip through race relations past and present. Her books not only unpack the effects of systemic racism and implicit bias; they also examine how sharing our stories can build the foundations necessary for dismantling oppression. Most importantly, she holds a mirror up to the audiences who need it most. Called  “an unforgettable tour de force of social-justice and activist literature,” (Booklist, starred review), Stone balances messages of economic and racial hardship with levity—offering humor, hope, and excitement alongside crucial lessons about equity. Recently, she crafted a middle-grade series about Shuri, the beloved character from Marvel’s blockbuster hit Black Panther, and her latest book Fast Pitch—described as “a Black girl retelling of The Sandlot”—is slated for release in August of this year. Like her written work, Stone’s talks are charismatic and eye-opening, exploring how we can create a world where we are all free to be fully human.

Stone’s work has attracted national attention—shooting to the top of bestseller lists, chosen as a William C. Morris Award Finalist, and appearing twice on NPR’s Best Books of the Year list. She is one of six contributors to the multi-authored Blackout, which went to a twelve house auction across the United States.

In Nic Stone’s debut novel Dear Martin, lead character Justyce McAllister is racially profiled by a white cop, prompting him to begin a journal to the late Dr. King. Like many Americans, Stone was deeply affected by the deaths of Trayvon Martin and Michael Brown—young, unarmed African American men who were killed without provocation. In response, she wrote Dear Martin, a project considering current affairs through the lens of Martin Luther King Jr.’s teachings. The book—and its companion novel Dear Justyce—both became instant New York Times bestsellers for their poignant exploration on the effects of systemic racism on the lives of African American youths.

In this gripping talk, Stone draws from the themes in her work, while stressing the need for equity, accountability, and empowerment in reshaping our society toward antiracism. We must deconstruct the world as it is if we are to build a better one, says Stone. Her talk highlights the importance of human connection in carrying Dr. King’s dream forward into a more tangible reality. Audiences will come away enlightened and motivated to act as a force for social change.
Literature

On Being Human The Power of Storytelling

In this poignant talk, Nic Stone draws on the full scope of her work to explain how marginalization is rooted in the subconscious dehumanizing of other people. She reveals how sharing our human stories, both past and present, builds the empathetic foundations necessary to dismantle all forms of oppression. Unpacking the key differences between equity, equality, and liberation, Stone demonstrates how the messaging in the books we read shape the way we see the world and the people in it, ourselves included.
This talk helps audiences tune into the stories of others and unlock their own—finding within themselves the listeners and storytellers our world needs to effectively address social injustice.

In This New YA Novel, A Lottery Ticket Could Change Everything For This Teen

The Explosive Y.A. Novels Fans Have Been Waiting For