Every film is a political act; it’s how you see the world. 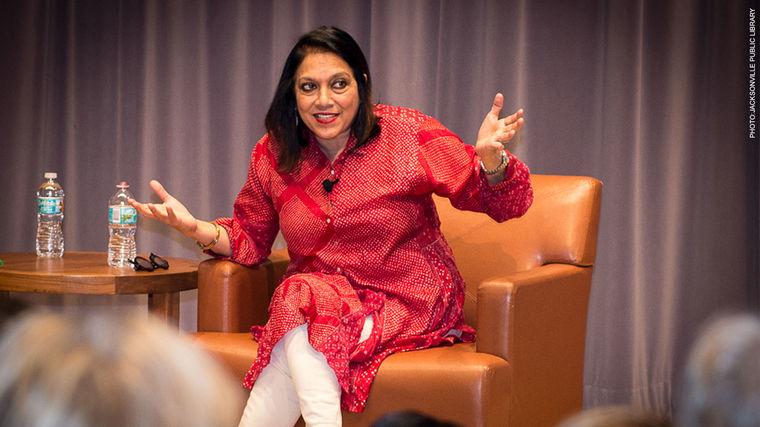 If We Don't Tell Our Own Stories, No One Else Will

Reflections on a Life in Film

Raised in India, schooled at Harvard, and living in New York City, Mira Nair uses her natural grasp of identity conflict to make films that explore race, gender, inter-generational strife, cultural appropriation and displacement. A poignant speaker, she captures beautifully the tug of competing worlds felt by millions of immigrants around the world.

“I look for the humanity in people, however big the politics or oppressive the situation may be. I want to help us hold a mirror to ourselves.”

From her debut film, the Oscar-nominated Salaam Bombay!, to her Amelia Earhart biopic, Amelia, Mira Nair has established herself as one of the most formidable directors working today. She makes films that are, according to Entertainment Weekly, “funny, rueful and sexy.” Salaam Bombay! won 25 international awards, including two at Cannes, for best first feature and most popular entry. Her other films include Mississippi Masala (with Denzel Washington), Vanity Fair (with Reese Witherspoon), The Namesake (with Kal Penn), and Monsoon Wedding, which Roger Ebert called “one of those joyous films that leaps over national boundaries and celebrates universal human nature.” Her recent film Queen of Katwe, starring Academy Award-winning actress Lupita Nyong’o, centers on ten-year-old Ugandan chess prodigy Phiona Mutesi and her unlikely rise to fame as a Woman Candidate Master at the World Chess Olympiads. The New York Times named it a Critics’ Pick, raving, “If there is anyone out there capable of remaining unmoved by this true-life triumph-of-the-underdog sports story, I don’t think I want to meet that person.”

Nair took her first foray into television with her adapation of Vikram Seth’s 1,349-page epic novel A Suitable Boy. The six-part series premiered on BBC One in the U.K., and closed out the Toronto International Film Festival, where the filmmaker was honored with the Jeff Skoll Award in Impact Media. Nair was heavily inspired by the India of the 1950s, the time period the show was set, saying, “It was a secular time and a time of real idealism, taking from the English what we had known, but making it our own.” A Suitable Boy is the first Indian period drama of its kind in British TV history, grappling with questions of love, religion, and political identity in the period following India’s liberation from British rule.

For her next television project, Nair is attached to direct The Jungle Prince of Delhi—Pulitzer Prize-winning journalist Ellen Barry’s mesmerising story (and podcast) of the Royal Family of Oudh—for Amazon Studios.

Nair also directed Monsoon Wedding the musical, which debuted at the Berkeley Repertory Theater in California, and will soon open in India and Singapore. As reported in The New York Times, “If Monsoon Wedding the film aimed to offer a more realistic version of a Bollywood fantasy, the stage musical returns the material to a heightened realm. As Ms. Nair pointed out, it is a natural fit for musical theater—the story ‘has music in its bones,’ she effused—but she has at her side collaborators, including Ms. Dhawan, who are unlikely to turn it into a frothy confection.”

Nair’s film The Reluctant Fundamentalist made its North American debut at the Toronto International Film Festival. The film is an international political thriller that follows a young Pakistani man chasing corporate success on Wall Street. He finds himself embroiled in a conflict of his American dream, a hostage crisis and the call of his homeland.

Away from the camera, Nair has mentored as part of the Rolex Protege Arts Initiative and her company, Mirabai films, established a non-profit, Maisha, in support of screenwriters and directors in East Africa and South Asia.

An Evening with Mira Nair

A skilled director, Mira Nair is equally adept talking to an audience; she began her career in front of the camera, not behind it. With sophistication, she discusses the craft of filmmaking as well as the issues she so passionately explores in her films: the tug of competing worlds felt by millions of immigrants, and ways to bridge the gap between cultures, races and genders. In the process, Nair shows you how film can challenge stereotypes and generational assumptions. A thoughtful, generous talk by one of Hollywood's brightest directors.

Mira Nair and the Pakistani Dream

On my radar: Mira Nair

"Never treat what you are doing as a stepping stone to something else. Do it fully and completely."...

Being The "Other": Director Mira Nair On Cultural Identity

Mira Nair's "inquisitive nature and social conscience combined with a healthy appetite for...

Timed to coincide with the American release of her newest film, The Reluctant Fundamentalist, Mira...

With numerous international awards and an Oscar nod under her belt, it would be easy for Mira Nair...