Health care isn’t just about medicine—it’s about bridging the economic, political, and racial divides that keep us from having an equitable world.

Physician | Director, Department of Medicine, Health, and Society at Vanderbilt University | Author of Dying of Whiteness 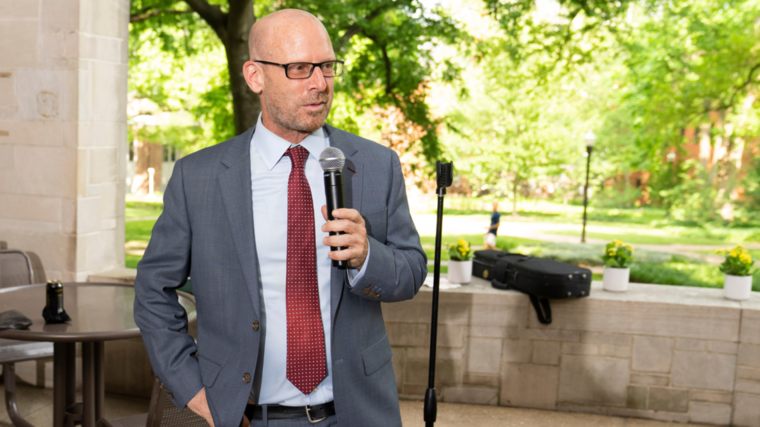 Jonathan Metzl on Political Issues That Could Impact Your Health (2:38)

The Young Turks: Why Gun Violence Is Rising In America

Mental health ‘1 piece of the puzzle’: Psychiatrist on Buffalo shooting

Should US increase gun regulations, or do gun freedoms reduce violence?

How can we use health care to create a more just, equitable, and happier world? Expert physician Jonathan Metzl says that our health is deeply connected to where we come from, our social class, and how we vote—if we want everyone to be healthy, we need to improve quality of life for people across racial, economic, and political lines. He’s an award-winning author, professor of Sociology and Psychiatry, and medical director at Vanderbilt University, as well as the world’s most respected authority on health equity. Jonathan is creating a “kinder, more equitable society” using “middle ground and common sense solutions to help people on both sides.”

“Metzl is provocative...he brings a unique blend of psychiatric insight and data analysis—as well as philosophical insights—into concepts of risk, cost, and community.”

Dr. Jonathan Metzl is a renowned psychiatrist, professor, and the world’s foremost expert on the relationship between socioeconomic status and race when it comes to physical and mental health. Jonathan calls this “structural competency”, and it means understanding all the pieces that make up our health: where we come from, where we went to school, who we know, how much money we make, and how we vote. We can use this knowledge to achieve a new level of health equity that will help more people before they get sick. This will mean paying closer attention to the needs and challenges faced by communities that are often overlooked by policymakers. LitMed calls Jonathan’s work “a major contribution to public health, sociology, and American studies.”

The former Guggenheim fellow is the author of several books including Dying of Whiteness: How the Politics of Racial Resentment Is Killing America's Heartland, winner of the Robert F. Kennedy Human Rights Book Award. It is filled with interviews with real, everyday Americans, and demonstrates the need for cooperation and diversity in a divided country. The book makes the case that many Americans vote against their own interests out of fear or ignorance, and this leads them to have worse health outcomes and quality of life. Public Books says that “Metzl’s shocking conclusions keep ringing in your head long after you put his book down.” His earlier books include The Protest Psychosis, Prozac on the Couch, and Against Health: How Health Became the New Morality. Alondra Nelson of Columbia University and the Social Science Research Council calls his writing “pathbreaking, provocative, empathetic, and poignant.”

Jonathan is the Frederick B. Rentschler II Professor of Sociology and Psychiatry, and the director of the Department of Medicine, Health, and Society at Vanderbilt University.  He is the winner of the 2020 APA Benjamin Rush Award for Scholarship, and has written extensively for the New York Times, Washington Post, VICE, Politico, and other major publications about the most urgent hot-button issues facing America and the world. He has appeared on MSNBC’s Morning Joe, C-SPAN, CNN, AM Joy, PBS’s Amanpour & Co., and HBO’s Real Time with Bill Maher.

Building a Culture of Health Race, Gender, and Social Justice in Health Care

Our health isn’t just determined by our biology—things like socioeconomic status, race, gender, and political alignment directly impact our quality of health and life. In this groundbreaking talk, acclaimed physician Jonathan Metzl shines a light on inequity in healthcare and guides us to actionable solutions to improve the quality of life for people across racial, economic, and political lines. When we understand the connections between mental health, diversity and racial justice, social and political movements, and our physical health, we can make informed choices that benefit the wellness of all.
Politics & Society

Racial resentment has led many lower-and middle-class white Americans to political choices that would supposedly put them back on top. But as physician Jonathan Metzl’s book Dying of Whiteness shows, those policies actually placed white Americans at ever-greater risk of illness.
Racial resentment fueled pro-gun laws in Missouri, caused resistance to the Affordable Care Act in Tennessee, and drove cuts to schools and social services in Kansas. The results of these policies? Rising dropout rates and falling life expectancies. Thoughtful, poignant, and vital, this talk offers a smart and necessary plan for working collectively toward a society that would be healthier for everyone.
The Post-Pandemic World

The COVID-19 pandemic set into motion a series of events that will reshape society in lasting ways, from how we live, work, and learn, to the social issues we protest and aim to change, and the stories we consume. These changes will be shaped by innovations from fields including tech, medicine, architecture, humanities, politics, science, and economics. Ultimately, the post-COVID era will affect how we think about ourselves, our relationships with others, our sense of social and racial justice, and perhaps most importantly, our place in the world for years to come.
In this talk, physician Jonathan Metzl will explore the pandemic’s impact on our past, present, and future. Engaging with politicians, artists, activists, doctors, scientists, and educators, he paints an illuminating portrait of our current moment, as well as answers looming questions: How will we address diversity, equity, and inclusion? What is the future of our jobs and careers? What have we learned about battling misinformation?
This is a must-listen presentation that covers everything from structural inequality to public health to our social and economic futures.
Politics & Society

Mental Illness, Mass Shootings, and the Politics of American Firearms

There is perhaps no one more qualified to speak on gun violence in America than Jonathan Metzl, a professor of sociology and psychiatry at Vanderbilt University, an award-winning author, and the director of Vanderbilt’s Center for Medicine, Health, and Society. In this talk, he breaks down four frequent assumptions that often arise in the aftermath of a mass shooting: 1) that mental illness causes gun violence, 2) that psychiatric diagnosis can predict gun crime, 3) that shootings represent the deranged acts of mentally ill loners, and 4) that gun control “won’t prevent” another shooting.
In this thought-provoking presentation, Jonathan uses scientific evidence and engaging storytelling to paint a nuanced picture of the increasingly lethal realities of American life—and how we can move forward.

How the Politics of Racial Resentment Is Killing America's Heartland

How Schizophrenia Became a Black Disease

Prozac on the Couch

Prescribing Gender in the Era of Wonder Drugs

How Health Became the New Morality

What research shows on the effectiveness of gun-control laws

As Texas school shooting confounds the world, CBS News looks at other countries' reactions to their own massacres

What Is the ‘Great Replacement' Theory and How Did It Go Mainstream?

'Dying of Whiteness': Why Racism is at the Heart of America's Gun Inaction

Many Americans 'Shooting Themselves in the Foot' to Maintain Racial Hierarchy

We are only just beginning to understand the deep impacts of racial resentment—including its fatal...