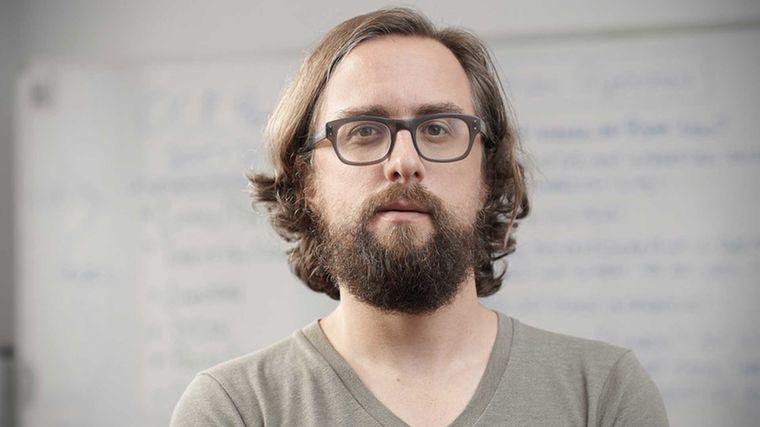 Think About Data in a Human Context

How Is Data the New Oil?

Experience the Human Side of Data

The world seems more fragmented than ever, but to Jer Thorp—one of the world’s most innovative artists—those fragments are data, and data can be read, organized, and used for good. Twitter, Microsoft, and The New York Times have all turned to him to analyze their data and create visual maps to show meaning being metrics. By creating multi-dimensional, visually stunning projects (often using hundreds of square feet of imagery and billions of pieces of data), Thorp makes data accessible, enabling all of us to change the way we think and act in relation to the information around us.

As a data artist, Jer Thorp reveals the human stories within endless scrolls of raw information, expressing trends, movements, and economics through vibrant graphics (and public art) seen by hundreds of millions of people. The first ever Innovator-in-Residence at the Library of Congress (where he recently completed an eighteen-month stint), a National Geographic Fellow, former Data Artist-in-Residence at The New York Times, and Artist-in-Residence at the Museum of Modern Art, Thorp’s first book, Living in Data, will be released in Spring 2020. Besides documenting his many international projects, the book is also primer for people want to know more about how data works, and how it’s changing the way we live and work. Finally, it’s a roadmap for how we might find agency in the face of oppressive data systems, and how individuals and communities can find their “data voice.” Living in Data will be released by Farrar, Strauss & Giroux.

“Underpinning Jer’s examples is a powerful common thread of humanizing data and making it a living piece of our personal histories and cultural poetics.”

Thorp is also a brilliant business speaker. He tracks consumers in ways few digital experts can—contextualizing their behavior, personalizing the anonymous, and frequently validating the work of digital marketers.

On stage, Thorp illuminates the exciting potential of what his projects mean for society. “The work we do with data is not passive. It affects people’s lives and wellbeing,” he says. Data is about meaningful connections, as Thorp explored in his moving 9/11 memorial at Ground Zero, for which he wrote a program that organized the names of victims not by alphabetical order, but by relationships—putting coworkers next to coworkers, and brothers next to brothers. From 2013 to 2017, Thorp operated The Office for Creative Research, where he and his team implemented ingenious projects—like counting all the endangered elephants across the African continent, which helped influence ivory poaching policies. In February of 2017, amidst a rising tide of xenophobia, The OCR installed a sculpture in Times Square that depicted New York City’s rich history of immigration. A mesmerizing, funny, and socially engaged activist—often working at the juncture of social justice, technology, marketing, and art—Thorp reveals what we normally, and understandably, could never see in big data. And he makes it look cool.

Native to Vancouver, Thorp now lives in New York City, where he teaches in NYU’s Interactive Telecommunication Program. He has been a vocal advocate around data, ethics, and privacy, spearheading a project with The OCR called Floodwatch, a collective ad monitoring tool that empowered individuals to see how advertisers were profiling them (often inaccurately, and unfairly). The aim was to help combat discriminatory practices, such as targeting specific demographics to fill a housing development over others. His award-winning work has been exhibited, read, and implemented in Europe, Africa, Asia, North America, and South America. He has over a decade of teaching experience, and has presented at The Ford Foundation in New York City, the National Academies, and the Library of Congress.

“We had an amazing time with you! It was fun and interesting and easygoing. Thank you! And the event was a huge success! People’s comments are raves. They had never heard this view about Big Data and it made total sense to them. Huge impact!”

What is it like to live in data? To be a human in a world where every action is instrumented, where our jobs and our families and our love lives are increasingly quantified? In this session, Jer Thorp, National Geographic Explorer and former data artist in residence at The New York Times, will share a series of projects by The Office for Creative Research which examine the fast-changing relationship between data and culture. From visualizations to performances and public art, Jer will explore ways in which we can bring data closer to humans, and propose ways that we can all work to make a more livable data world.
Technology

We all know that data visualization can be a powerful tool for understanding. But what about data sonification? Or data sculpture? Or data performance?

Jer Thorp’s career as a data artists has brought him from the bustling newsroom of The New York Times to a submersible in the inky depths of the Gulf of Mexico; from the gleaming white galleries of MoMA to the divided streets of St. Louis. In this talk, Jer will examine how artists can insert themselves into data systems to provoke, interrogate and examine. Jer will discuss his own evolving practice as a Data Artist, and will propose ways for data visualization practitioners to move beyond charts and graphs.

In this talk, Jer Thorp shares his beautiful and moving data visualization projects, helping audiences put abstract data into a human context. From graphing an entire year’s news cycle, to mapping the way people share articles across the internet, to the 9/11 Memorial in Manhattan, Thorp’s cutting-edge visualizations use technology and data to help us learn about the way we use digital technologies, become more empathetic in the data age, and ultimately, tell the story of our lives. How can understanding the human side of data lead to innovation and effective change? What value is there in the novel and interactive approaches to data visualization? And, what are the business applications of creative data-focused research? Thorp teaches audiences how adding meaning and narrative to huge amounts of data can help people take control of the information that surrounds them, and revolutionize the way we utilize data.

Commemorative Calculus: How an Algorithm Helped Arrange the Names on the 9/11 Memorial

With the Office of Creative Research, data artist Jer Thorp and his team sought to “physically...

Data on the Delta: Jer Thorp's Experiment in Live-Data Tracking

Jer Thorp: We Need a New Bill of Rights for Data Privacy [VIDEO]

According to data artist and big data speaker Jer Thorp, we’re getting a raw deal when it comes to...

Have you ever wanted to explore the Okavango Delta, one of the Seven Natural Wonders of Africa? Big...

Big data is the new oil. That's a phrase that Jer Thorp, a data artist and popular speaker on big...

Jer Thorp didn't get to where he is today by playing it safe. The big data speaker and National...

We all have big hopes for what big data can do for us. But before we can put these metrics to good...

Viral content: It's an internet buzz word that many claim to understand—but few actually do. Big...

"Often my work stems from a question in my mind or an interesting data set," Jer Thorp, a big data...

When big data speaker Jer Thorp's tenure as the Data Artist In Residence at The New York Times ended...

Data Visualization Is A Process—Not A Product: Jer Thorp In HBR

Jer Thorp, a big data speaker and the Former Data Artist in Residence at The New York Times, doesn't...

You can learn a lot about people in 140 characters or less. Millions of tweets of that length are...

As Jer Thorp explains in his recent PopTech keynote speech, big data could be the next big oil—which...

Jer Thorp in Mashable: "Data is Becoming a Part of Our Everyday Lives" [VIDEO]

"More and more and more, data is becoming a part of our everyday lives," Jer Thorp says in a new...

Although many marketers believe big data may be the next big oil (read: enormous profits), Jer Thorp...

Big Data Speaker Jer Thorp: "These Are Not Numbers, They Are Parts Of Our Lives." [VIDEO]

"We think about data as numbers," big data speaker Jer Thorp says. "What we don't think about,...

The Lavin Agency would like to welcome our newest speaker, Jer Thorp, who holds one of the world’s...