In the fight for justice, we must face the difficulty of distinguishing the past from the news of the day. 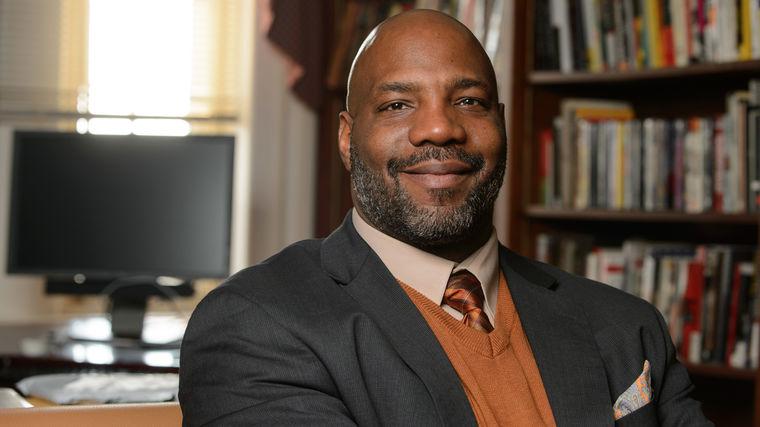 How Black Enfranchisement Can Be a Political Too (5:06)

How Is the American Democracy Fragile? (5:56)

Why the American Prison System is Antithetical to Democracy (2:26)

What the Housing Crisis Teaches Us About the Criminal Justice System (8:02)

We Fight, or We Don't: The Struggle for Racial Equity in the Trump Era (7:08)

Contingent Citizenship in the Age of Ferguson and Baltimore (54:17)

Against the backdrop of a pandemic that disproportionately affects Black people, and a renewed push for racial justice, historian and Peabody Award-winning journalist JELANI COBB emerges as a clear voice in the fight for a better America. A PBS Frontline correspondent for two critically acclaimed documentaries—Policing the Police and Whose Vote Counts—Cobb explores the enormous complexities of race and inequality, while offering guidance and hope for the future. A long-time writer for The New Yorker, and editor of its recent anthology collectionThe Matter of Black Lives, Cobb’s work is described as having the “rigor and depth of a professional historian with the alertness of a reporter, the liberal passion of an engaged public intellectual and the literary flair of a fine writer.”

“Exemplary gathering of writings on Black history, arts, politics, and culture in America. . . . An essential volume for readers interested in the Black past and present.”

— Kirkus Reviews (Starred Review) on The Matter of Black Lives

Jelani Cobb is a staff writer at The New Yorker, writing on race, history, justice, politics, and democracy, as well as Columbia University’s Ira A. Lipman Professor of Journalism. He recently co-edited The Matter of Black Lives, a collection of The New Yorker’s most ground-breaking writing on Black history and culture in America, featuring the work of legendary writers like James Baldwin and Toni Morrison. Publishers Weekly writes, “Beyond the stellar prose, what unites these pieces, which range widely in length, tone, and point of view, is James Baldwin’s insight, paraphrased by Jelani Cobb, that ‘the American future is precisely as bright or as dark as our capacity to grapple with [the legacy of racism].’” Cobb also edited and wrote a new introduction for The Kerner Commission—a historic study of American racism and police violence originally published in 1967—helping to contextualize it for a new generation. The condensed version of the report, called The Essential Kerner Commision Report, is described as an “essential resource for understanding what Cobb calls the ‘chronic national predicament’ of racial unrest” (Publishers Weekly).

During a historic election in the midst of a global pandemic, Cobb investigated allegations of voter fraud and disenfranchisement as a PSB Frontline correspondent in the documentary Whose Vote Counts, revealing how these unfounded claims entered the political mainstream. He clearly presents how racial inequities, COVID-19, and voter suppression became interlinked crises, contributing to a long legacy of inequality. For tackling one of the key issues at the heart of modern U.S. politics and carefully elucidating what the fight for voting rights looks like in the 21st century, Whose Vote Counts received a Peabody Award. Cobb was also the correspondent for the Frontline documentary Policing the Police, where he examined whether police reform is a viable solution in the wake of mounting protests calling for racial justice, and explored how we can hold police departments accountable. Previously, Cobb was prominently featured in Ava Duvernay’s 13th, her Oscar-nominated documentary about the current mass incarceration of Black Americans, which traces the subject to its historical origins in the Thirteenth Amendment.

Cobb is the recipient of the  Hillman Prize for opinion and analysis journalism, as well as the Walter Bernstein Award from the Writer’s Guild of America for his investigative work on Policing the Police. He is the author of Substance of Hope: Barack Obama and the Paradox of Progress, and To the Break of Dawn: A Freestyle on the Hip Hop Aesthetic.

“It went so well! Jelani and our CEO had a great conversation and it felt so organic. The best part was that Jelani was able to cater his amazing knowledge and skill set to our audience. He used lots of amazing terms that helped people who are not so well-versed in social justice or history understand his point. Over 2/3 of our company came out and that's one of the highest-attended events we've had this past year.”

The Half-Life of Freedom Race and Justice in America Today

Journalist Hendrik Hertzberg once described the work of Jelani Cobb as combining the “rigor and depth of a professional historian with the alertness of a reporter, the liberal passion of an engaged public intellectual and the literary flair of a fine writer.” So it is with Cobb’s riveting, auspicious keynotes: up-to-the-moment meditations and breakdowns of the complex dynamics of race and racism in America. Whether speaking on Black Lives Matter and activism, the battle zones of Ferguson or Baltimore, the legacy of a black presidency, or the implications of the Trump era—or, more generally, on the history of civil rights, violence, and inequality in employment, housing, or incarceration in the US—Cobb speaks with the surety and articulate passion of only our best journalists. His keynotes inspire us to work, tirelessly, toward achieving an ongoing dream of equity—of genuine democracy. They show us that not only are the levers of justice in our hands, but we can move them in the direction we see fit. And they remind us that the only obstacle holding us back is the comforting illusion that we’ve already achieved our goals.

Writing from The New Yorker

The Substance of Hope

Barack Obama and the Paradox of Progress

To the Break of Dawn

A Freestyle on the Hip-Hop Aesthetic

The Devil and Dave Chappelle

Under Trump, A Hard Test For Howard University

Inside the Trial of Dylann Roof

Donald Trump, Chicago, and the Lessons of 1968

The Anger in Ferguson

The much-talked-about Netflix documentary 13th shines a moving, galvanizing light upon the state of...

Bill HB2 should jog your memory, says Jelani Cobb—and not in a good way. The controversial North...