In sport, business, and life, pressure is really a privilege. 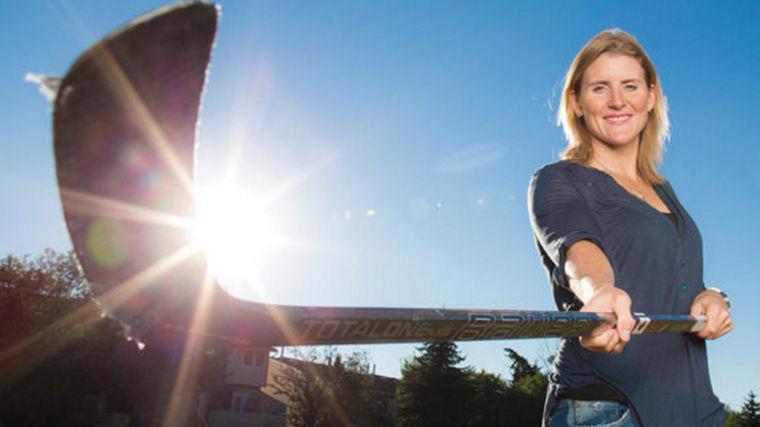 Fighting the Establishment by Playing Hockey

Being Part of the Greater Team

Value Those Around You

Hayley Wickenheiser is one of the best female hockey players in the world. The youngest member chosen for the Canadian’s Women’s National Team at the age of 15, she led the squad to six gold and three silver medals at the Women’s World Hockey Championships. As an Olympian, she has won four consecutive gold medals, including one at the Sochi Winter Olympic Games—where she also served as the ceremony’s flag bearer. Now a community leader and mentor to aspiring athletes, Wickenheiser reveals how she made her mark in a male-dominated sport—and the grit, resilience, and determination that carried her to Olympic triumph.

A titan of sport and a leader both on and off the ice, Hayley Wickenheiser has five Olympic medals—a silver from the Winter Olympics in Nagano, Japan, and four gold medals won in consecutive Olympic Games, including one at home in Vancouver and one in the Sochi Winter Olympics. Wickenheiser was inducted into the International Hockey Hall of Fame, dubbed one of Sports Illustrated “Top 25 Toughest Athletes in the World,” and was appointed to the Order of Canada “for her achievements as an athlete and for her contributions to the growth of women’s hockey.” She retired as the country’s all-time leading scorer after 23 years on the Canadian women’s team and almost a dozen Olympic and World Championship medals. Wickenheiser now works to provide mentoring opportunities for young athletes, including founding the Wickenheiser International Women’s Hockey Festival.

Wickenheiser was also the first female player in the world to score a point in a men’s professional game while playing in Finland, and she is the first woman in history to have either played in or coached four NHL development camps with the Philadelphia Flyers, the Edmonton Oilers, and the Toronto Maple Leafs. Recently, the four-time Olympic gold medallist took on the position of Assistant Director of Player Development with the Toronto Maple Leafs, where she will monitor Leafs prospects in the WHL, as well as work with players on both the Leafs and the AHL’s Marlies.

Wickenheiser’s passion for sport is paralleled by her drive to give back to the community in several ways, particularly to organizations with a commitment to children such as KidSport, Right To Play, Dreams Take Flight, Clean Air Champions, and Spread The Net.

“She was the perfect complement and opening to our event. Tying in with our 100th anniversary celebration, she hit all the right notes in terms of meeting challenges to come, and came with lots of stories, insights, and humour. She really took time to connect with our delegates.”

“Hayley was wonderful to work with and was the best imaginable close for our conference. She did such an excellent job of weaving our theme (The Science of Success) in with her Olympic experience, and graciously signed cards and took pictures with our attendees.”

“Thanks again for helping us out last night. You rocked it. Feedback has been amazing as people in attendance were completely impressed by your stories and also commented about being inspired and motivated from hearing you speak. I even caught glimpses of a few tears in the room at certain points of your talk. We also received high praise for your approach-ability and people liked the picture op with you and the medals. Once again, thank you!”

The Olympic Experience A Journey to the World Stage

In this breathtaking talk, championship hockey player Hayley Wickenheiser details her journey to the world’s most elite athletic event: The Olympics. What was it like to compete with the world watching? How does a successful team come together under pressure? And how can you stoke the competitive fire in you—even when you feel like giving up? Candid, inspirational, and refreshingly honest, Wickenheiser offers a behind-the-scenes look at the intensity, determination, and teamwork that propelled her to become one of the best hockey players in the world.
Women & Leadership

Hockey has notoriously been a boys club, but that didn’t stop Hayley Wickenheiser from fiercely pursuing the sport and rising to the top. She even played for the Finnish men’s league, and became the first female player in history to score a point on a men’s team. After retiring from professional hockey, Wickenheiser became the Assistant Director of Player Development for the Toronto Maple Leafs—once again becoming the first woman to hold the position with the franchise. In this motivational talk, Wickenheiser reveals what it’s like being a woman in a male-dominated sport, and shows us how to go after what we want, even when the odds are stacked against us.

Inside the World’s Greatest Sports Event

The Interview with Kristina Rutherford

Being off-balance for a while is okay, Hayley Wickenheiser says

‘I always knew I was coming back’: Hayley Wickenheiser proves she’s not done yet after foot surgery

Competitive Spirit: Lessons from Motivational Speaker Hayley Wickenheiser in the Globe and Mail

Speaker Hayley Wickenheiser knows a few things about success. The six-time Olympian is one of the...

Leadership Speaker Hayley Wickenheiser: An Inspiration On And Off The Ice

2014 may seem pretty far away to most of us, but leadership speaker Hayley Wickenheiser is already...