What can the Earth’s most dangerous places teach us about risk, fear, and adversity? 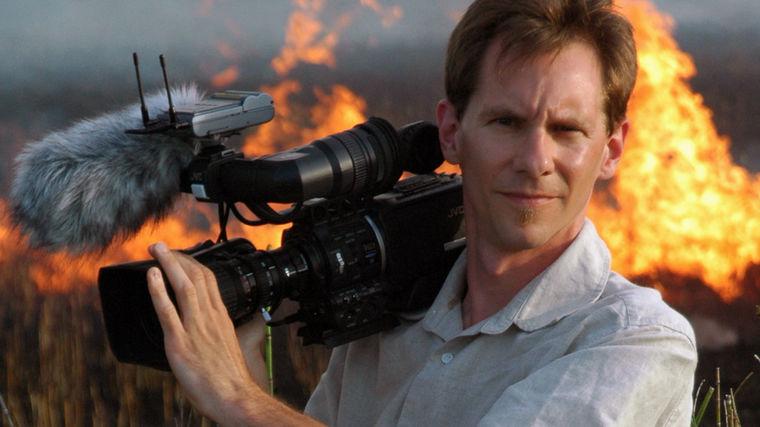 Does Fear Make You Live Longer?

Is There Anything Left to Explore?

George Kourounis travels to the most remote and inhospitable corners of the Earth to document the extremes of nature. An award-winning explorer, one of the best-known storm chasers, and the former host of Angry Planet, Kourounis frequently finds himself up close to the world’s most fearsome forces: vicious tornadoes, the eyes of hurricanes, and inside erupting volcanoes. In talks, he chronicles his often dangerous, always spectacular adventures—revealing the motivational power of harnessing fear, as well as first-hand insights to how climate change is impacting the environment.

“I don’t have a death wish. I like to think I have a life wish: to squeeze as much life out of these experiences and these days that I have as I can.”

George Kourounis is a newly-minted  Explorer-in-Residence with The Royal Canadian Geographical Society. His efforts to document nature’s most extreme conditions have taken him all over the globe, into places most people would flee from. Whether he’s following a tornado outbreak in Kansas, a monster hurricane in the Gulf of Mexico, or forest fires in Australia, Kourounis is always in the middle of the action with his camera rolling. Most recently, he carried The Royal Canadian Geographical Society’s flag into the active Marum volcano crater on Ambrym Island, Vanuatu—home to one of the world’s seven permanent lava lakes.

Kourounis' explorations have often resulted in him accomplishing world’s firsts. While leading a scientific expedition for National Geographic, he became the first person to set foot on the bottom of the Darvaza flaming gas crater, a fiery pit that has been burning for over 45 years in the Turkmenistan desert. For this stunning feat—more people have stood on the surface of the moon—Kourounis was named a Guiness World Record-Holder. “I take things to the extreme, but I do want to encourage people to do something they’ve always wanted to do but were afraid to, because that’s where the best juice in life is,” explains Kourounis. His adventures have fascinated and inspired audiences worldwide, broadcasted on the Discovery Channel, National Geographic, BBC-TV, CNN, the Science Channel, and of course, on his own adventure TV program, Angry Planet, which has been broadcast in over 100 countries.

Kourounis started chasing storms over 20 years ago and has expanded his explorations to include all types of extreme natural phenomena ever since. Today, as an RCGS Explorer-in-Residence, Kourounis provides geographical education and outreach across Canada. He is also a fellow of The Royal Geographical Society (U.K.), chair of The Explorers Club Canadian Chapter, and a member of the Society Of Environmental Journalists. Kourounis has given 4 TEDx talks, addressed the UN’s Environmental Emergencies Forum, and won the Stefansson Medal his “outstanding contributions to science and to public education.” Recently, he was named one of Canada’s greatest explorers by Canadian Geographic magazine.

“George came to Trinity College School as part of the Mac Campbell Lecture series and enthralled a full house of students, faculty and parents with a dazzling audio/visual display and exciting and gripping tales of his encounters with nature. The audience was captivated by George’s presentation and his theme of always following one’s true passion resonated with many students. The question and answer session that ended the formal part of the evening was thought-provoking, but George’s willingness to speak with a number of students informally afterwards also went a long way to making this evening a very special one for many!”

“We were pleased with George's presentation and impressed with his ability to capture the audience’s attention. There was never a dull moment as George kept everyone engaged as he spoke about fear to our audience of 4200+.”

“George proved to be the most gracious presenter we have had the privilege to work with. Everybody was absolutely stoked to have been there. We really appreciate all the effort he put in.”

“Thank you for making such an incredible and gripping presentation. It was an amazing experience watching the stories being told in person! It was thrilling to see the pictures; to hear the stories behind the pictures was jaw-dropping! Our audience was hanging on every word, and sometimes the edge of their seats.”

“What a delight to have such an inspiring presentation kickoff the conference; the photos and film clips were truly amazing. I always wondered who was standing on the edge of the hurricane or other disaster, documenting the action. Now I know, and I’m grateful for that.”

Pacific Northwest Chapter of the International Society of Arboriculture
Testimonials

“We recently had the privilege of having George present at our conference for Emergency Management professionals. George’s passion for nature was clearly evident throughout his session and kept the audience engaged with his stories and images. How he tied his experiences in to meet the needs of this particular audience was excellent. Despite having celebrity recognition, his modest approach to his experiences drew the audience into his adventures. His session was ranked one of the best by the audience of the three day conference. I would strongly recommend George to be part of any Conference or as a public speaker at an event. While being engaged as an audience, people will walk away with a greater appreciation for the forces on this planet and the delicate balance we as people share with nature.”

“I have been the fortunate recipient of a steady flow of very appreciative comments about the Spring Speakers Series, some saying that it was the best talk that they had heard in years. Over and above the fascination that so many people have with the extremes of nature, you have a rare ability to connect with the audience and draw in each person as if they were sharing the adventure with you.”

“George was simply an outstanding motivational speaker who went well beyond his speaking role to assist our Conference Team throughout the entire conference. He was well received by delegates and made a special effort to connect with each and every individual in attendance. If you have the opportunity to work with George, I know you and potential clients will be the better for the experience.”

“Working with George Kourounis at our recent TEDxMilton event was a pleasure and an honour. George fixates the audience with his tales of exploration and danger. The TEDxMilton committee was elated that George would take the time out of his busy schedule to come out to our Inaugural TED Talks event. We wish him well as his future engagements unfold and hope to see him back for a future TEDx event in Milton again.”

“At the Ontario Science Centre, our “Meet the Stormchaser” program featuring George Kourounis was a huge success. The multi-media, the stories, the interaction with our visitors, all far surpassed our expectations. George wove excellent science content into his presentation and worked well with our staff, visitors and media. We look forward to having George back for special programs in the future.”

Cultivating Curiosity The Anecdote to Fear

Some consider George Kourounis to be fearless, but nothing could be further from the truth. Sure, it takes a certain kind of person to drive into the eye of a hurricane, to dangle from a rope over a steaming volcano, or jump into a pond with thousands of hungry piranhas. But although Kourounis has done all these thing—and much more—he’s not without fear. In this talk, he shows us why fear is not only something that can be managed and controlled, but why it’s a vital element to accomplishing anything worthwhile.
Whether in business, with personal challenges, or even extreme exploration, fear is what gives us an edge. It’s that force that keeps us in check—and without it, we’re prone to making reckless decisions. In this inspiring keynote, Kourounis teaches your team how to harness their fear, and use it to their advantage. His secret weapon? Curiosity. It’s the antidote to fear that we all used to have in abundance when we were children, a trait that tends to get squeezed out of us as we enter adulthood.
Climate Crisis

From chasing hurricanes and tornadoes, to exploring some of the most remote and ecologically sensitive places on Earth, George Kourounis has been on the front lines of climate change for years, witnessing first-hand the effects of our changing environment. How did we get into this situation?  What does the future hold? And what can the average person do to make a difference? These questions and more will be covered in this talk, as Kourounis pulls back the curtain to reveal the truth about climate change in a dynamic, engaging way. A rich multimedia presentation showcases some of his most poignant, and occasionally terrifying, encounters with the fury of nature, including being at ground zero during hurricane Katrina. Kourounis offers an undoubtedly unique perspective on the consequences of climate change and our defences against it.
Motivational

Chasing Mother Nature The Inspiring Misadventures of a Storm Chaser

George Kourounis’ experiences facing down extreme weather and natural disasters is unparalleled. In this presentation, he describes his scariest and most rewarding experiences and how they have sculpted his outlook on the world. It is an inspiring, personal chronicle of his quest to encounter and study some of the most awesome and powerful forces of nature. With a colorfully-detailed multimedia presentation, featuring actual video clips from many of his adventures, Kourounis will demonstrate how and why he tests his own physical endurance to pursue and understand the forces of nature that affect our planet and the life inhabiting it.

Supplemented with thrilling video and stunning photography, your audience will be swept up and brought along on a worldwide thrill ride from the depths of erupting volcanoes to the path of oncoming tornadoes, from the beachfront of a hurricane landfall to the hottest and coldest places on Earth. Awe-inspiring, educational, inspirational, and entertaining, Kourounis’ unique experiences, and his zeal for sharing his adventures will have you audience on the edge of their seat one minute, then laughing at his equally epic misadventures the next.

Q&A: The First-Ever Expedition to Turkmenistan’s “Door to Hell”

See you in Hell: Explorer becomes the first person to descend into Turkmenistan’s 1,000C pit of fire which has not stopped burning since 1971

George Kourounis, an explorer-in-residence for the Royal Canadian Geographical Society and the host...

Braving The Elements: George Kourounis On How To Weather Any Storm

Most people run from extreme weather. George Kourounis, on the other hand, is constantly putting...