In an age of data and digital distractions, art can help us take control of our attention and memories. 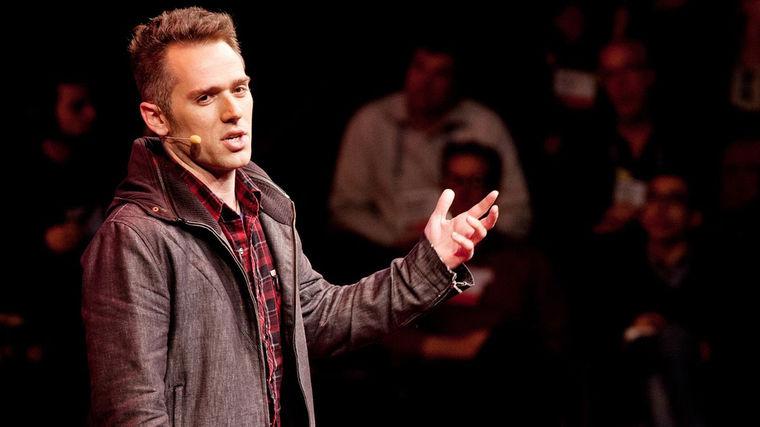 How is technology reshaping our relationship to time, memory—even death? Gabriel Barcia-Colombo’s interactive artworks ask bold questions about what it means to live, and die, in today’s frenetic world. From massive installations that awaken us to the present moment, to his Hereafter Institute—a project that lets us experience digital memorials—he is making vital new rituals for modern life.

“You could say that Gabriel Barcia-Colombo is something of a modern day mad scientist...[his] work distills a moment, a gesture, an emotion—taking something universally relatable and instantly recognizable and giving it a physical form.”

A new media artist, NYU professor, and TED Senior Fellow, Gabriel Barcia-Colombo’s work focuses on collections, memorialization, and the act of leaving a digital imprint for the next generation. He makes interactive art: vending machines that dispense human DNA; blenders that “blend” the miniature people inside them; perfumes that smell like famous banned books. In his talks, he describes his kaleidoscopic work, and how film, electronics, live actors, and biomaterials can work together to create inimitable art that plays on our culturual need to chronicle, preserve, and wax nostalgic. His work has been celebrated in The New York Times, Los Angeles Times, Bloomberg, The Huffington Post, L.A. Weekly, and many other publications.

Barcia-Colombo was recently commissioned to be the first digital artist to show work at the New Fulton Terminal Stop with the MTA Arts & Design program in New York City. His work has been featured in the Volta, Scope, and Art Mrkt art fairs as well as Grand Central Terminal and the New York Public Library. He recently received an Art and Technology grant from the Los Angeles County Museum of Art where he created “The Hereafter Institute,” a company that questions the future of death rituals and memorials and their relationship to technology.

Barcia-Colombo served as a member of the artist advisory board at the New York Foundation for the Arts, as well as the education committee member at the Museum of Art and Design. He is also a Senior TED Fellow. He is the founder of Bunker.nyc, a pop-up gallery showcasing emerging art made with technology. Barcia-Colombo is a New York Foundation for the Arts grant awardee and faculty member at the Interactive Telecommunications Program at New York University’s Tisch School of the Arts.

Recapturing the Present Art Designed to Remind and Memorialize

Today, our lives move faster than ever. We’re overwhelmed by noise and distraction, screens and alerts; our attention spans are outstripped by goldfish. With no chance for reflection, we flit from one electronic platform to the next, and barely register how our lives are being recorded—our data monitored and sold, our every movement, message, and purchase imprinted in digital code. We unconsciously document our live because, like somnambulates, we live unconsciously.

To Gabriel Barcia-Colombo, it’s time to wake up. In his dazzling, interactive talks, he takes audiences on a tour of his massive installations: works that shock us out of distraction, forcing us into confrontation with the present—with poetry projected onto the walls of Grand Central Station, or super-slow-motion portraits of New Yorkers flickering on the walls of the Fulton Center (work seen by thousands of commuters). His projects also shake us into an awareness of time, and finitude. When we die, our social accounts act as graveyards. But who owns them, Barcia-Colombo asks—who owns our data, our memories, our last words? In his Hereafter Institute, he’s forcing us to imagine the future of memorialization, creating digital urns and records, even VR-based mausoleums where our avatars might interact with future generations in perpetuity. With speakers like Barcia-Colombo, we can reclaim the present: recovering our attentions; becoming more mindful of how we use technology; and envisioning how our friends and loved ones might mourn—and remember.

What happens to a person's Facebook posts after they die?

One artist is using them to build digital memorials

This hour, TED speakers explore why taking it slow is crucial ... for all of us.

Museum: Is Time the Only True Luxury Object?

Beyond the bling: the most pointless luxuries ever

Inside the funhouse art experiences of TED Fellow Gabriel Barcia-Colombo

It’s never a slow news week at Lavin, rather the opposite among our busy speakers. Whether they’re...