Illusions are more than entertainment—they’re a tool for building persuasion and influence. 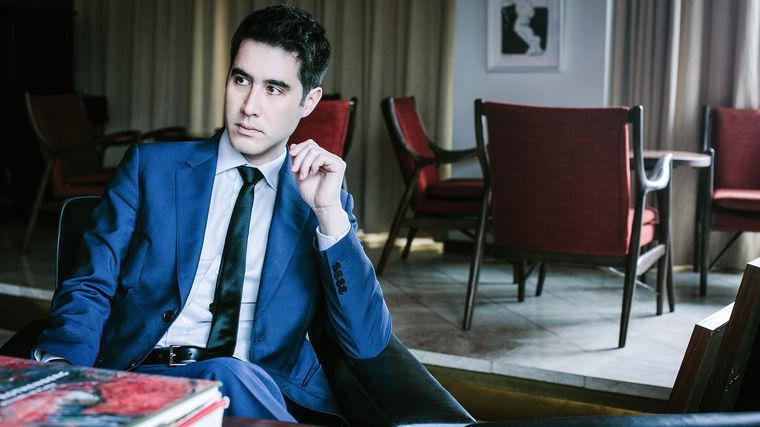 TED Talk: Think Inside the Box: Creativity Within Constraints and Parameters

TED Talk: The Science of Illusion

Breaking Down the Illusion of Free Choice

Empowering Your Audience by Giving Them Choice

The Key to Illusion Isn’t Magic. It’s a Deep Understanding of Human Psychology.

David Kwong is no ordinary magician. He’s a New York Times crossword writer, TED speaker, Harvard grad, Broadway star/producer, and a consultant on blockbuster films like The Imitation Game. His debut book Spellbound draws upon his diverse body of work to reveal how the principles of illusion can be used to gain an edge on the competition. With easy charm and mind-bending tricks, Kwong shows us how to command attention, sway opinions, and sell ideas.

“David Kwong has conjured a unique and seamless blend of cognitive psychology, business acumen, and the secrets of being a renowned magician.”

Puzzles and magic might not seem like the most logical companions, but Kwong sees a clear parallel between the two. In fact, he’d go as far as to say that magic tricks, when broken down, are puzzles. “These are things that can be broken down, they are based in science, they are based on being 1, 2, 3, 52 steps ahead of everybody else,” Kwong explains. And they work on us because as human beings, we are all “wired to solve” problems and “create order out of chaos.” In his book Spellbound: Master the Seven Principles of Illusion to Gain Influence, Captivate Audiences, and Unlock the Secrets of Success, Kwong shows us how to bridge the gap between perception and reality to increase our powers of persuasion and influence—in relationships, business, and beyond. In addition, Kwong debuted a brand new stage show, The Enigmatist, with Baseline Theatrical (producers of mega-hit Hamilton) and one of the production designers of Harry Potter and the Cursed Child.

On stage, Kwong combines his unmatched knowledge of illusions with a showman’s command of the audience. But he’s more than an entertainer, with keynotes that fuse his seven principles with observable (and yes, entertaining) demonstrations. His insights on “Free Will Architecture”—easing others towards selecting something you proposed yourself—are fascinating to hear about, but even better to observe in action. Genuine, spontaneous, effortlessly deft—Kwong has been called “ridiculously engaging”—and that has less to do with illusion than natural charm.

A veteran “cruciverbalist” (crossword puzzle constructor), Kwong routinely creates puzzles for The New York Times, Los Angeles Times, and other national publications. He is also the founder of the Misdirectors Guild, an elite group of magicians that specialize in magic for film and television. He is the puzzle and secret code consultant for the hit NBC show Blindspot. He was the head magic consultant on the 2013 film Now You See Me, teaching magic to Jesse Eisenberg, Morgan Freeman, Michael Caine, Mark Ruffalo, and Woody Harrelson. Kwong has also designed magic and puzzles for films such as Ant-Man, The Incredible Burt Wonderstone, Now You See Me, Mission Impossible: Rogue Nation, and The Magnificent Seven.

“I’ve known David for a number of years ... He’s had in mind doing a grand trick involving a crossword [for his TED talk] for some time, so he asked if I would be willing to be part of it. Of course I said yes. I love to do new things, new twists, and this is a great one. Plus I would do anything to help David.”

David Kwong has astounded CEOs, TED talk audiences, and thousands of other hyper-rational people, making them see, believe, and even remember what he wants them to. But his feats aren’t supernatural; they are fundamentally human. Illusion is an ancient art that centers on control: commanding a room, building anticipation, and appearing to work wonders. Illusion works because the human brain is wired to fill the gap between seeing and believing. Successful leaders—from Steve Jobs, Warren Buffet, and Ted Turner to President Obama, Megyn Kelly, and Jeff Bezos—are masters of control and command who understand how to sway opinions and achieve goals. Now, Kwong reveals how to bridge the gap between perception and reality to help you increase your own powers of persuasion and influence. In his years of research and practice, he’s discovered seven fundamental principles of illusion—rules anyone can learn to gain mastery. And with this entertaining and fascinating keynote, you’ll discover a different way to sell your idea, product, or skills, and make your best shot better than everyone else’s.

Think Inside the Box Creativity Within Constraints and Parameters

In this talk, David Kwong explores the complex relationship between boundaries and productivity. Though it may seem counterintuitive, most people are at their most creative when they innovate within a given set of boundaries. How can you tell a clever story while obeying the construction rules of a crossword puzzle, the three-act structure of a screenplay, or the sensitive angles of a stage illusion? Kwong, a master of working within the lines, explains how constraints give us the freedom to create. We are at our most innovative when we design a new form for something familiar, and subsequently express it in a novel and compelling way. Kwong demonstrates some of his own groundbreaking puzzles and illusions by way of inspiring a new method of problem solving.

In this inspiring, cerebral, and fun-filled presentation—perfect for end-of-year gatherings—David Kwong dazzles audiences with boundary-defying (and mind-bending) puzzles and sleight of hand. But make no mistake: no ladies will be sawn in half. Kwong is one of the most innovative, virtuosic, and smart illusionists alive. As a New York Times crossword puzzle constructor and go-to expert on illusion for major Hollywood blockbusters (Now You See Me, Mission Impossible: Rogue Nation, The Imitation Game), Kwong offers his signature style of thought-provoking entertainment to mesmerize even the most jaded spectators. In other words, at the forefront of the ‘alternative magic scene,’ Kwong’s making magic really, really cool. This is an ideal performance for organizations looking for something lighter than an average keynote, yet still charged with intelligence, humor, and the fundamental elements of storytelling. It’s magic updated for a modern, sophisticated audience, that at once satisfies high expectations and our timeless hunger for wonder.

Creating Order Out of Chaos

We live in a lightning-fast world of constant information and data. With incessant streams of Tweets, updates and newsfeeds, we can easily be overwhelmed by data. How can we make sense out of all the scattered bits of information that we’re barraged with every single day? In this talk, David Kwong, creator of the new immersive live show, The Enigmatist, demonstrates through a series of “mental gymnastics” how he collects and organizes vast amounts of data in his brain. As a magician, puzzle designer, and producer, Kwong illustrates how he synthesizes these seemingly disparate fields via a tour de force of sleight of hand and puzzles.

David Kwong Is the Puzzle Master Behind NBC's *Blindspot*

In Honor of His Hotly-Anticipated New Show, The New York Times Chats With Illusionist David Kwong

When new Lavin speaker David Kwong was planning his 2014 TED Talk, he knew he wanted to do something...