Hope is vital, but it's not a strategy: only through turning it into action will we find solutions.

Founder of Doctors Without Borders, Canada 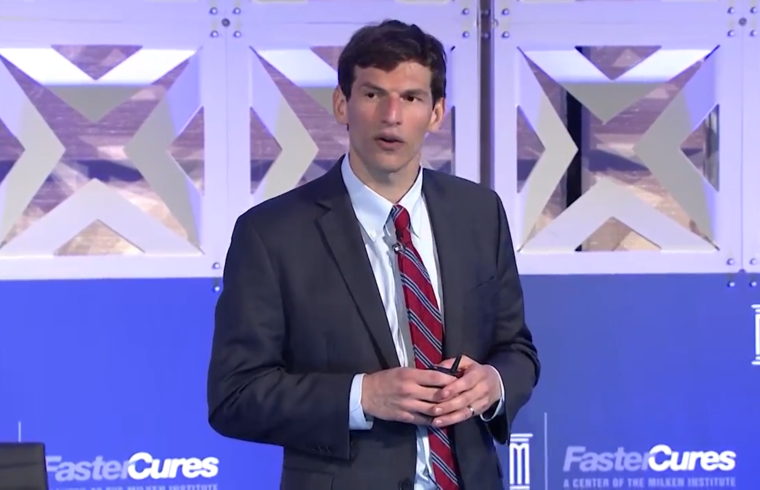 Life in Overtime: How to Stay Positive in Challenging Times (5:52)

Collaborating for a Cure: The Power of Personalized Research (7:35)

How do you deal with a pressing challenge when the clock is running out? For Dr. David Fajgenbaum, that challenge was his own incredibly rare condition. With no known cure and experts baffled, the med student and former Georgetown quarterback was even read his last rites. But then, he decided to take matters into his own hands. In his fascinating, one-of-a-kind memoir Chasing My Cure, Fajgenbaum shares the urgency of his unparalleled perseverance in the face of insurmountable odds. His remarkable story proves the power of hope, and shows what can happen when chance, love and resilience collide.

“Quite literally, I could not put this book down. Dr. Fajgenbaum is an inspiration. Chasing My Cure is a page-turning chronicle of living, nearly dying, and discovering what it really means to be invincible in hope.”

When a twentysomething med student starts experiencing overwhelming fatigue and organ failure out of nowhere, it’s no ordinary case. What do you do when doctors tell you they have no approved treatment for your condition, and you’re read your last rites? That’s what former Georgetown quarterback David Fajgenbaum (Forbes’ 30 Under 30) was faced with—five times. Nicknamed “The Beast” for his strength and stamina, his body was ravaged by an illness that made him unrecognizable—so he dedicated his life and career to finding innovative treatments for mysterious conditions: all while fighting one firsthand.

After being diagnosed with Castleman disease—a deadly illness that presents like a mix of cancer and autoimmune disorder—and relapsing after chemo, it became clear the treatments available weren’t going to be enough: Fajgenbaum was going to have to take matters into his own hands. His radical approach to conducting original medical research with crowdsourcing and treating himself made him a champion for not only the community of those with Castleman, but for the 30 million Americans living with rare conditions. He turned wild, ambitious hope into real action—and the treatment he identified and prescribed himself has brought about a lasting, yet tentative, remission.

Now the co-founder and Executive Director of the Castleman Disease Collaborative Network, Fajgenbaum’s persistence in the face of incredible obstacles has turned into a revolution on rare disease research. Sometimes there are even solutions hiding in plain sight; like how the drug that saved his life was developed 25 years earlier for another illness, and had never been tested for Castleman before. Fajgenbaum’s brand of innovation and determination are inspirational: warm and engaging, he explores how we’re all living in overtime—and what we can do about it. His story of harnessing relentless hope and putting it into action is remarkably compelling, universal, and powerful.

Fajgenbaum has been profiled on the Today Show and Good Morning America, featured in Science, and had a cover story by The New York Times. His memoir Chasing My Cure is a Publisher’s Weekly  nonfiction national bestseller. Fajgenbaum is one of the youngest people ever appointed to faculty at UPENN, and is in the top one percent youngest grant awardees of an R01, one of the most sought-after grants in biomedical research.

As a twentysomething med student and former quarterback Dr. David Fajgenbaum started experiencing overwhelming fatigue and organ failure out of nowhere. It was no ordinary case: he was eventually diagnosed with Castleman disease, and doctors told him there was no approved treatment. After relapsing post-chemo, Fajgenbaum knew he would have to take finding a cure into his own hands. Collaborating with other patients and doctors, and through several more relapses, he eventually found a treatment that, though still tenuous, has worked for him. Throughout his incredible ordeal, Fajgenbaum learned that sometimes solutions are hiding in plain sight—this drug had actually been around for 25 years, just never tested for his disease—and that hope isn’t enough on its own: hope is only powerful when tied to action. He shares how applying radical approaches to old problems can lead to breakthroughs, and how he’s revolutionizing the way medical research can be done.

After saving his own life with a repurposed drug, a professor reviews every drug being tried against Covid-19. Here's what he's found

A young doctor fights to cure his own rare, deadly disease

His Doctors Were Stumped. Then He Took Over.

This med student was given last rites before finding a treatment that saved his life. His method could help millions

A Doctor's Race to Turn Hope into Action

Faced with a life-threatening illness with no known cure, David Fajgenbaum made it his mission to...