How to rethink our healthcare, redesign our systems, and reinvigorate our hope, in the fight against the Coronavirus. 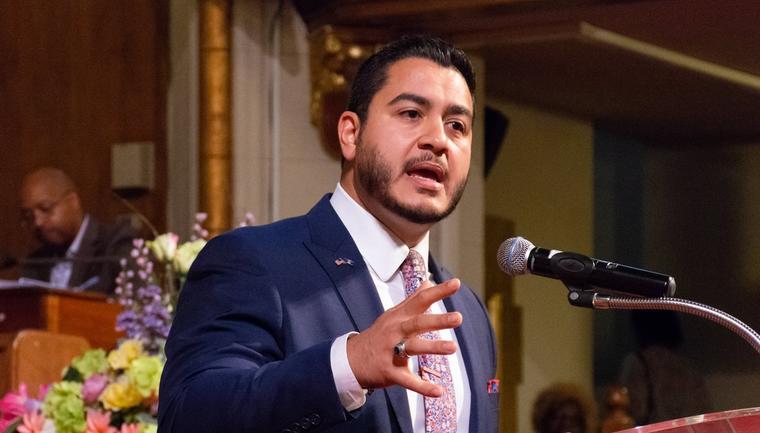 What a Broken System Costs Its Citizens (1:55)

How the Pandemic Redefined Conversations About Public Health (1:46)

Profit Over Patients: Breaking Down the American Healthcare System (2:02)

Dr. Abdul El-Sayed made history when he became the youngest-ever public health official in a major American city. When the pandemic swept over America, the epidemiologist served as a voice of reason, reassurance, and credibility as the nation battled misinformation. Aside from frequently contributing to CNN, he is the host of the podcast America Dissected, author of Medicare for All, and a leading progressive activist—dubbed one of the movement’s “brightest young stars” by Sen. Bernie Sanders. In talks, El-Sayed continues to inspire and lead us toward a more just, accessible, and resilient healthcare system for all.

At 30, Abdul El-Sayed served as Detroit’s Health Commissioner—making him the youngest health official in a major American City, ever. In his first book, Healing Politics: A Doctor’s Journey into the Heart of Our Political Epidemic, he shares his powerful personal narrative, along with compelling forays into science and history, to diagnose an underlying national epidemic: the epidemic of insecurity. Compassionate, bold, and uncompromising, El-Sayed proposes a new direction to bridge the divides this epidemic deepens, and shares his vision of a more democratic America. And his dedication to making that happen has won him the praise of people like Senator Bernie Sanders and Rep. Alexandria Ocasio-Cortez, who said, “Abdul inspires me, his commitment inspires me, his background, his work inspires me, and we have to have each other’s backs.” In his second book, Medicare For All: A Citizens Guide, El-Sayed teams up with Dr. Micah Johnson—a respected physician and policy advisor—to write the most engaging, accessible, and clear-eyed guide for actually achieving universal healthcare coverage in America. “Regardless of your politics, their thought-provoking writing will push you to think more deeply and critically about the future of health care in America,” declares Vivek H. Murthy, the former Surgeon General of the US.

His popular new podcast, America Dissected, takes an in-depth look at ten key healthcare issues facing Americans today. Part of the Crooked Media podcast family (Pod Save America, Lovett or Leave It), America Dissected offers Abdul El-Sayed’s exceptional historical, political and social insight into how we got here, and what it means for our health: not only as people, but as a nation. Covering everything from the anti-vax movement and superbugs to the loneliness epidemic and the opioid crisis, it’s a timely, troubling, yet ultimately hopeful look at the past, present, and future of American healthcare. Also a CNN Political Contributor, El-Sayed lends his expertise to the network, with a focus on the Coronavirus and the 2020 Presidential Election.

Public health is about prevention. And in that respect, we failed—not just in preventing the pandemic, but in protecting Americans from its worst consequences: disease, death, and destitution. How could this have happened to the nation that was arguably in the best position to avert catastrophe? Dr. Abdul El-Sayed, a physician, epidemiologist, and recent author of the book Healing Politics, offers a unique and medically-informed perspective on what went wrong.
First and foremost, our healthcare system is a house of cards, says El-Sayed. Without strong foundations, the stress of COVID-19 threatened to overwhelm public health almost immediately. Secondly, the persistent lag in data distorted the public’s perception of progress, and may have even contributed to a sense of “false hope.” Finally, though COVID-19 did not cause the extreme disparaties in our society, it definitely exposed them. How can we move forward now that we’ve seen all of this preventable destruction?
In this talk, El-Sayed—the host of the massively popular public health podcast America Dissected—helps us trace how we got here, and what this experience will teach us about the future. Moving forward, it’s essential that we rebuild our fragile healthcare system with a robust infrastructure; close all of the gaps in our data; and address the epidemic of insecurity in our nation. If you’re at all interested in how we can emerge from this crisis stronger than before, this talk is a must-listen.
Politics & Society

The coronavirus has left a trail of devastation in its wake. If anything, the virus has exposed how...