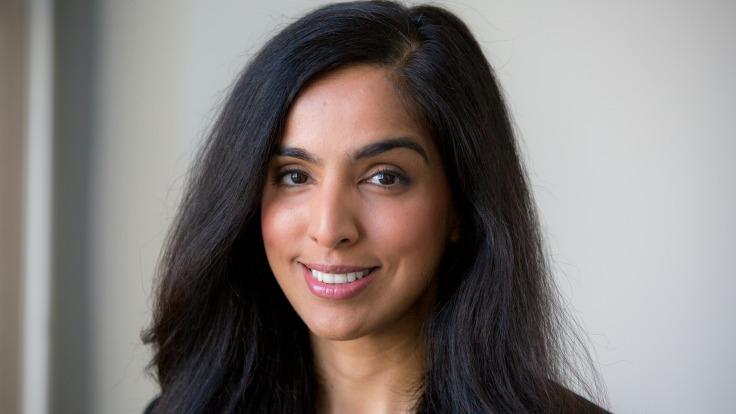 Giving Is Also an Opportunity to Receive (2:33)

At NPR, AARTI SHAHANI is familiar with covering ground-breaking stories, and her own is no exception. Sharing her life as the daughter of immigrants—from India, by way of Casablanca—she tells of a close call with mass deportation, her father’s devastating dealings with the criminal justice system over an innocent mistake, and her personal journey of perseverance. Also detailed in her memoir, Here We Are: American Dreams, American Nightmares, she explores the obstacles marginalized groups face today, and how we—a nation of immigrants—can unite to dismantle them and empower our fellow Americans to enjoy the freedom we all deserve.

“As it chronicles immigrant tragedy and triumph, this provocative book also reveals the dark underside of the American judicial system and the many pitfalls for people of color within a landscape of white privilege. A candid and moving memoir.”

— Kirkus Reviews on Here We Are

An author, activist, and award-winning journalist, Aarti Shahani is bringing her unique yet universally relevant experiences as the precocious daughter of immigrants to her illuminating work. When her father was arrested for mistakenly selling watches to the notorious Cali drug cartel, the determined Shahani took it upon herself to reclaim and reshape the American dream that was taken from her him. Her lifelong dedication to empowering immigrant communities—before becoming an NPR Contributor, she was a community organizer in New York City, working with immigrants facing deportation—have garnered her praise and awards from the media, academic institutions, and activist organizations alike.

In her heart-wrenching memoir Here We Are: American Dreams, American Nightmares, Shahani reveals her experiences facing the deep-seated issues within American society, and especially immigrant communities and communities of color: Racism, economic inequality, the lack of upward opportunity, and a criminal justice system that is brutal by design. Shahani shares her vibrant, hopeful story without shying away from the difficulties her family faced. She’s seen firsthand that, as much as the American dream really can come true for immigrants—in many ways, she’s personally living it today—the American nightmare is still very much alive for far too many.

The book has garnered extensive coverage and critical acclaim; called “timely, bittersweet” by Publishers Weekly; “riveting” by NPR; and “…a vivid, almost cinematic journey that is both beautiful and unforgettable," by Guy Raz, host of TED Radio Hour. Here We Are was also named one of Library Journal’s Best Biographies & Memoirs of the year. For her beautiful book, Shahani was recently honored with the National Immigrant Justice Center’s Human Rights Award—an accolade that has previously gone to investigative journalist Seymour Hersh, and the former President of Ireland, Mary Robinson. Though America may be a land of contradictions, as Shahani points out in her acceptance speech, the hypocrisy can actually be a source of hope. “We have to dare to dream. If COVID-19 and failed law enforcement have taught us anything, it’s that the rules don’t apply. Because they can’t. They don’t work. We need new rules. Now is the time to reimagine America.”

Shahani’s reporting has received awards from the Society of Professional Journalists, a regional Edward R. Murrow Award, and an Investigative Reporters & Editors Award. The Union Square Awards, and Legal Aid Society have honored her for her activism She also received the Paul and Daisy Soros Fellowship for New Americans, and was among the youngest recipients of the Charles H. Revson Fellowship at Columbia University. She received her Master’s in Public Policy from the Harvard Kennedy School of Government, on full scholarship.

Who Belongs in America Today? How the American Dream—and Nightmare—Coexist Today

What does it mean to be American? Who really belongs in this country? That question has chased every newcomer since the founding of the republic. Award-winning journalist Aarti Shahani, a Harvard-educated daughter of Indian immigrants answers these questions, and more, in her riveting talks that draw from acclaimed new memoir Here We Are: American Dreams, American Nightmares. Her story is as unique as it is universal to the immigrant experience. She’s a precocious scholarship kid at one of Manhattan's most elite prep schools, when her soft-spoken shopkeeper father gets arrested for mistakenly selling watches to the cartel. Together, the two represent the extremes that coexist in our country, even within a single family, and a truth about immigrants that gets lost in the headlines: it’s not “us” versus “them”—“they” are “us”.

She connects her story to broader themes of what marginalized groups experience in this land of opportunity and prejudice, freedom and injustice. It’s this fact of duality within our nation, how we adapt to navigate it, and the need for awareness and forgiveness, that are at the heart of Shahani’s journey, and her message to others.

In 'Here We Are,' Heart-Rending Challenges Of Immigration Are Exposed