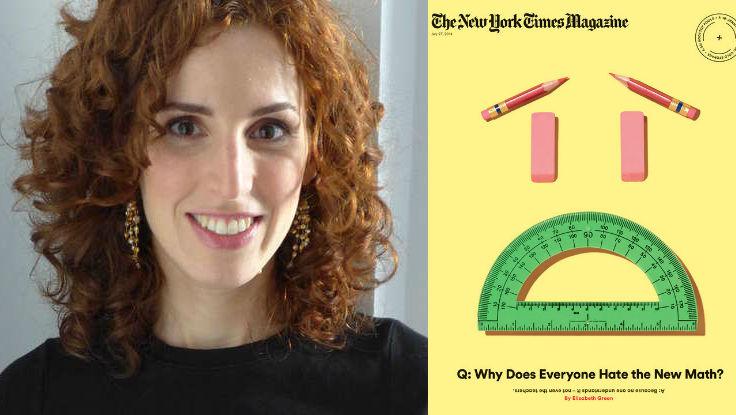 Why We Suck at Math: Lavin Speakers Add it Up in the Times

Math is having a moment. Recently, two Lavin speakers—Jordan Ellenberg and Elizabeth Green—topped the The New York Times' most-emailed articles list (No's 1 and 2, respectively) with stories on mathematics. They addressed why math matters, why most Americans are allergic to math, and how to teach it effectively, especially to students.

In his Op-Ed, Ellenberg, the affable author of How Not to Be Wrong, writes about how to incentivize math for kids. Looking to his own 8-year-old son, C.J, a baseball fan and reluctant mathematician, Ellenberg found that the trick is to make math—like baseball—a game:

What does it mean to coach math instead of teaching it? For C. J., it means I give him a “mystery number” to think about before bed. “I’m thinking of a mystery number, and when I multiply it by 2 and add 7, I get 29; what’s the mystery number?” And already you’re doing not just arithmetic but algebra.


For her epic New York Times Magazine cover story, “Why Do Americans Stink at Math,” Elizabeth Green looks at where and when math education in this country started to go wrong. In one amusing, if grim, anecdote, she outlines the way that our math skills are failing us in the most populist of forms: hamburgers:

In the early 1980s, the A&W restaurant chain released a new hamburger to rival the McDonald’s Quarter Pounder. With a third-pound of beef, the A&W burger had more meat than the Quarter Pounder; in taste tests, customers preferred A&W’s burger. And it was less expensive. A lavish A&W television and radio marketing campaign cited these benefits. Yet instead of leaping at the great value, customers snubbed it.


Why? Because customers saw the fraction “1/3” and assumed that they were getting less burger for their buck.

So, how can Americans get back on the right math track? To change, Green argues that “we will have to accept that the traditional approach we take to teaching math—the one that can be mind-numbing, but also comfortingly familiar—does not work. We will have to come to see math not as a list of rules to be memorized but as a way of looking at the world that really makes sense.”

To Ellenberg, that means gaming the system for kids, thus building incentive at the ground floor. Widening the lens, Green proposes that educators ought to retire outdated thinking to allow new standards and methods to emerge. Seeing a change in children will ultimately change the adult, says Green—a win-win situation for all.

In his talks, Ellenberg illuminates the everyday power of mathematical thinking; Green speaks on building better educators. To book Jordan Ellenberg or Elizabeth Green as a speaker for your next event, contact The Lavin Agency.