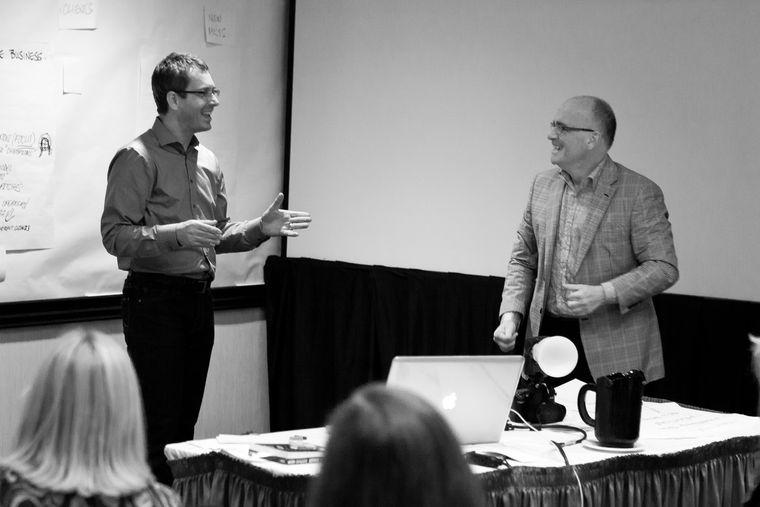 Visualizing The Lavin Agency: Tom Wujec Helps Us "See" What We Do

Last month at Lavin’s annual get-together, staff from New York City and Toronto shared stories and laughter, and talked about the year ahead. Pretty standard annual meeting stuff, right? Not quite. This year, Tom Wujec also led us in one of his famous “visualize your business” sessions, in which he helped us to “see” our company with a fresh perspective.

Tom has been a Lavin friend and speaker for years. He’s currently a Fellow at Autodesk, which is the Oscar-winning industry leader in 3D computer animation technology. To start the day, he wallpapered our conference room with a continuous scroll of blank paper. Over the course of eight hours (which passed quickly), we filled up the scroll with our faces, our history, our hopes, our goals, and an incredible visualization of our future. The story of Lavin, so to speak. Using nothing but markers and post-it notes, we collectively made this giant image a reality.

David Lavin kicked things off by telling the origin story of the agency (something about a joyride with Hunter S. Thompson), which Tom sketched in the background. With this as a base, we started building outward—and the scroll started to fill up. We drew, wrote aphorisms, acted out worst case scenarios, thought hard about our day-to-day roles, and reconsidered how we interact with people in and out of the office—all while pinpointing our strengths and weeding out weak spots. Wujec, never far away, was a genius in his role as facilitator—moving things along, making small suggestions, and spotting patterns within the complexity; mostly, though, we did all of “the work.” In the end, Tom left us with—or rather helped bring out of us—ideas and suggestions that, a month later, we are still unpacking.

Tom Wujec believes that visualization—thinking and communicating with images—is rapidly becoming the principal tool to foster innovation and business success. It's also a powerful new tool for leadership, one that can provide dramatic gains in productivity, cost reductions, and corporate confidence. As we discovered, it's also fun to be able to break from the stuffy model of team-building and strategy sessions and think differently, if even for a day, about what you do.