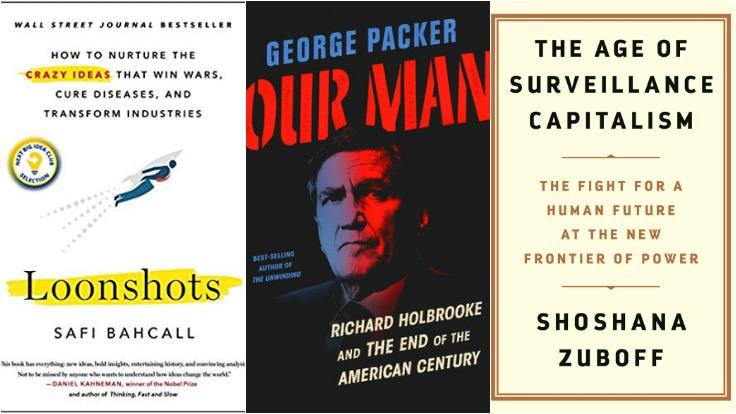 Bloomberg announced their highly anticipated year end list of the Best Books of 2019, which compiles what the most powerful figures in business read this year. Three Lavin speakers across various topics—Safi Bahcall, George Packer, and Shoshana Zuboff—made the cut. “The sprawl of genres is proof,” the list explains, “Many of the best lessons in business aren’t business-related.”

Loonshots: How to Nurture the Crazy Ideas that Win Wars, Cure Diseases, and Transform Industries

Bachall’s title made waves in the business world instantly, and his exploration of “loonshots”—the out-of the-box, wild ideas that just might work—and how to nurture them, struck a chord across all kinds of industries. It tied for Bloomberg’s most recommended title, with Stephanie Cohen, the Chief Strategy Officer of Goldman Sachs Group Inc. saying “I inhaled Loonshots…What I especially liked was his analysis of those occasions when an organization straddled the line between the two, managing to create the future while keeping pace with the here and now.

Our Man: Richard Holbrooke and the End of the American Century

Called “an intensely evocative portrait of America—and its leaders—at their best and worst.,” by Mike Krieger, the Co-founder, Instagram, Packer’s book offers an in-depth depiction of a nation in global crisis through the lens of the life of a legendary, complicated leader. But it’s more than the story of one man or even one nation. Expands Kreiger: “At its heart is a question relevant to anyone who’s managed a team: Are the elements that make someone great separable from their flaws?”

Shoshsana Zuboff
The Age of Surveillance Capitalism: The Fight for a Human Future at the New Frontier of Power

Also named one of TIME’s “100 Must-Read Books of 2019”, Zuboff’s work reveals a worrying truth about humanity: we’ve all opted into the commodification of our personal information for the sake of connection and convenience. Surveillance capitalism—a concept coined by Zuboff herself—defines this current age, where companies have exorbitant power over the economy and society—and even our personal choices and data. “Everyone should read it,” says Ana Botin, the Executive Chairman at Banco Santander SA, “But particularly business leaders who, like me, are committed to models that use personal data to empower people and to ensure real competition and transparency that truly allows consumer choice.”