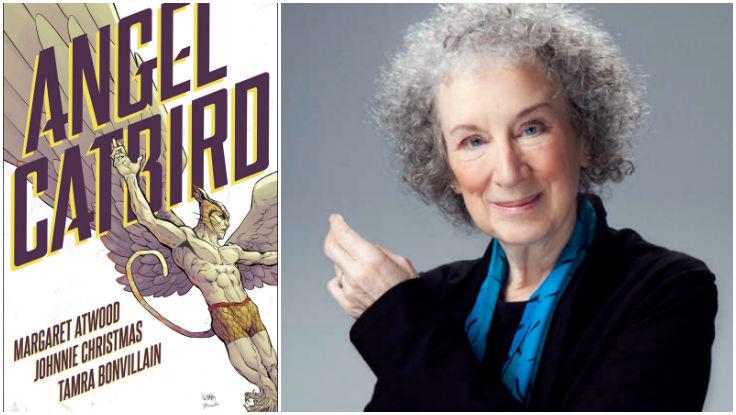 Literary icon Margaret Atwood is having one of the busiest years of her career. Two of her classics are being spun into major TV productions (The Handmaid’s Tale by Hulu and Alias Grace by CBC/Netflix), and we’re waiting on her modern retelling of Shakespeare’s The Tempest, called Hag-Seed, which arrives in October. But the bulk of Atwood-related press these days has been given to Angel Catbird, the author’s debut graphic novel, of which the first volume hit stores last week (Sept 6) from Dark Horse Comics. The first installment has been reviewed by NPR and The Daily Dot, and was the subject of an in-depth feature in Maclean’s.

In Angel Catbird, scientist Strig Feleedus collides with a cat and an owl while transporting a vial of gene-altering chemicals—and emerges as a mashup superhero with characteristics of both creatures. Feleedus soon befriends a legion of half-cats and finds himself battling the evil, world-domination-bent rat-man Dr. Muroid. It’s a classic superhero story with a twist: it doubles as conservation literature. Peppered throughout the book are little-known facts about cats and birds, which were included in partnership with Nature Canada.

The comic has already vaulted into Amazon’s Top 20 bestselling comics and graphic novels, and the reviews are filing in. Here’s the buzz on Angel Catbird:

“An eccentric and entertaining combination of a superhero comic (the title character is transformed into an animal that is part cat and part owl in a lab accident) and an appeal to consider the impact of cats on the environment.” – Publishers Weekly

“Angel Catbird sits at the intersection of Atwood’s love for superheroes, cats, birds, and mythology.” – Slate

“A real trip … Half cat, half bird, half pulp adventure and half environmental treatise.” – Polygon

“Everyone involved is clearly having the time of their lives bringing this beautifully bizarre book to life—and all for a good cause.” – Paste Magazine

In the past four years, Atwood has written four novels, a short fiction collection, and now Angel Catbird
—a truly prolific and varied output. We’re all excited to see what she comes up with next.

To book Angel Catbird author Margaret Atwood as the keynote speaker at your next event, contact The Lavin Agency, her exclusive speakers bureau.