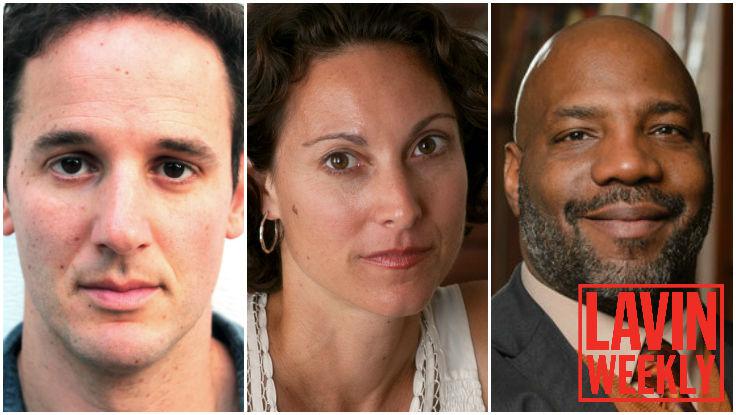 Lavin Weekly: Trump Takes Power Soon—So What? Halpern, Bazelon, and Cobb on Consumer Debt and Freedom of the Press

Today’s Lavin Weekly features three plugged-in speakers who understand the ins and outs of the incoming Trump administration. How will Trump’s Presidency affect credit, debt, and banking? Ask Jake Halpern. What about freedom of the press? Emily Bazelon and Jelani Cobb weigh in.

1. Will Trump Repeal a Crucial Consumer Protection Act? Jake Halpern on Debt Buying in the NYT

In The New York Times Sunday Review, speaker Jake Halpern asks how a Trump Presidency will affect regulations surrounding debt buying, a growing national problem since 2006. Here’s how the system works: Creditors sell off unpaid debts at a fraction of their cost—$100,000 of credit card debt might run you $1000—to largely unchecked collectors who track down the money (by any means necessary). And often, this leads to harassment, violence, and ruined lives. But in 2010, things took a turn for the better with the passage of the Dodd-Frank Act and the creation of the Consumer Financial Protection Bureau, which cracked down on collectors and sheltered debtors from harm. Trump, however, has promised to repeal Dodd-Frank. Could this spell the end of the CFPB? Perhaps. “Even if Mr. Trump doesn’t disband the agency,” Halpern says, “he could simply hobble it by replacing its director, Richard Cordray, with someone who is content to let the market regulate itself.” And this “self-regulation” often begets violence. To hear more about the problematic world of debt buying, check out Halpern’s true-life thriller, Bad Paper.

2. NYT Mag’s Emily Bazelon: In Office, Trump Will Try to “Control and Subdue” the Press

The superrich wield libel suits like weapons, says staff writer Emily Bazelon in The New York Times Magazine. President-elect Trump has been a plaintiff in seven such cases, winning only once. But a win is not what he’s after. To Trump, Bazelon says, “Libel law can be a tool of revenge,” “a weapon to be deployed against critics.” When faced with harsh words by the media, he’s more than comfortable stirring up lengthy legal battles—a strategy that may dissuade journalists from speaking their minds. “Once installed in the White House,” Bazelon continues, “Trump will have a wider array of tools at his disposal, and his record suggests that, more than his predecessors, he will try to use the press — and also control and subdue it.” Bazelon, who writes frequently for the Times Magazine, is one of the sharpest political writers today. Read her feature on how Trump swung Pennsylvania, here. And if you’re interested in booking her to speak live, give us a call or email.

Donald Trump’s relationship with the media, as Bazelon asserted, is a rocky one. In The New Yorker, speaker Jelani Cobb expresses a similar sentiment. When President-elect Trump met with New York Times journalists last week, “he alternately expressed interest in a better relationship with the publication and complained about what he saw as unfair treatment he’d received in its pages.” Some media outlets praised him for agreeing to the sit-down, but Cobb argues that this merely represents a lowering of the bar. It is problematic, he says, when “the minimal courtesy of sitting in a room without dispensing too many insults is considered a major sign of détente.” Trumpism has been normalized, but “there is nothing normal about what we are witnessing”—a fraud lawsuit, Twitter tirades against the cast of Hamilton, and endorsement by neo-Nazi groups. The press must hold its own against “domestic authoritarianism,” Cobb continues. Its freedoms may depend on it.

To hire Jake Halpern, Emily Bazelon, or Jelani Cobb as the keynote speaker at your company’s next event, contact The Lavin Agency speakers bureau, their exclusive representative.