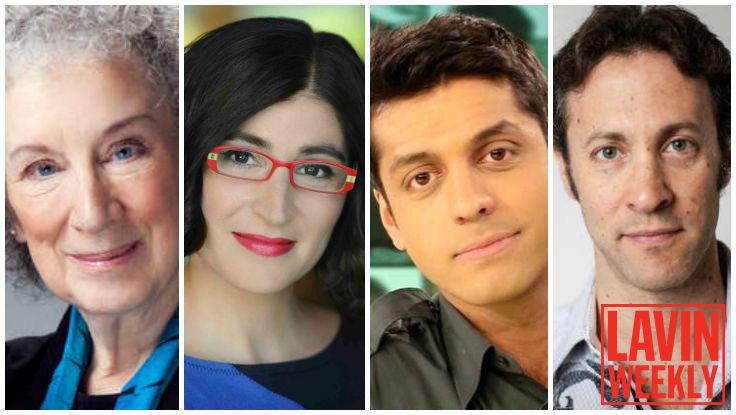 Margaret Atwood’s new novel, The Heart Goes Last, has received an enthusiastic early review at The Guardian. Portraying a dystopian near-future with an extra dose of madcap comedy, the new novel investigates “economic and environmental decline, the social and bio-engineering we employ in the vain hope of saving ourselves, and the speed with which the most well-intentioned experiments fall prey to greed and corruption.” Part of Atwood’s power isn’t just her reliably strong writing, brisk narrative pace, and wry sense of humour, but her prescient eye for our world’s most pressing problems. As The Guardian notes, “the world she depicts here is all too horribly plausible.”

2. Fighting Prejudice with Comedy: Negin Farsad on the TEDFellows Program

On the TEDFellows Medium page, we find a revealing discussion between Negin Farsad and Esra’a Al-Shafei about “being on the front line in the war against prejudice, using media as a weapon for social justice—and what makes it all worthwhile.” As an Iranian-American Muslim, comedian, and filmmaker, Farsad talks about her efforts to combat Islamophobia while touring her documentary The Muslims Are Coming! (2013). She reveals the particular hurdles of fighting bigotry in middle America, the ultimate impact of socially progressive comedy, and even dealing with the possible censorship of her message. As one of Paper’s “10 Feminist Comedians You Should Be Paying Attention To” and one of Huffington Post’s 50 Funniest Women, she’s definitely someone to get acquainted with.

3. Wajahat Ali and Reza Aslan on the Simple Question: How Do You Defeat ISIL?

Wajahat Ali, author and Co-Host of Al Jazeera America’s The Stream, had a lively, tasty, and bound-to-be-controversial conversation with Reza Aslan, religious scholar and author of No god but God and How to Win a Cosmic War, on how to defeat ISIL/ISIS over at Quartz. You can read a transcript or listen to the entire 30-minute discussion here. To Aslan, traditional tactics have proved ineffectual against ISIS because the group is “engaged in a different kind of war—a war of the imagination.” Other topics covered include sectarian divides between Muslims, how the US can win a war against extremist ideologies, double standards of the label ‘terrorism,’ the Israel-Palestine solution, the Iran Deal, and much more.

4. Francesca Gino Proves the Value of Asking for Advice

According to Harvard Business School professor Francesca Gino, people who seek out advice at work “are perceived as more competent than those who do not” (The New York Times). In the co-written paper “Smart People Ask for (My) Advice: Seeking Advice Boosts Perceptions of Competence,” Alison Wood Brooks and Francesca Gino analyzed “the responses of college students and working adults who were asked to give their impressions of people (a computer-simulated partner, in this case) who sought their advice on various written tests and tasks.” The results show that “unless you are feeling anxious, there is very little to lose if you seek advice”—despite the sometimes inaccurate message that asking for help is a sign of weakness. To Gino, author of Sidetracked, when you ask for help, “People do not think less of you—they actually think you’re smarter.”

5. David Eagleman and Max Richter: Helping Us Get Some Rest

Renowned neuroscientist David Eagleman worked as a consultant with composer Max Richter on Sleep—an eight-hour composition intended as “a lullaby for a frenetic world.” Airing on BBC Radio 3 from midnight to 8 a.m. on September 27, it will be performed live before a “sleeping audience,” and promises to be “the longest single continuous piece of music ever broadcast live on the BBC.” With Eagleman’s assistance, the piece will not only soothe a frazzled and sleep-starved mind, but “help neuroscientists discover how music affects the subconscious” (Telegraph). “I think of Sleep as an experiment into how music and the mind can interact in this other state of consciousness,” Richter says, “one we all spend decades of our lives completely immersed in, but which is so far rather poorly understood. I consulted with the neuroscientist David Eagleman on how music can relate to the sleep state and have incorporated our conversations in the compositional process of the work” (BBC).