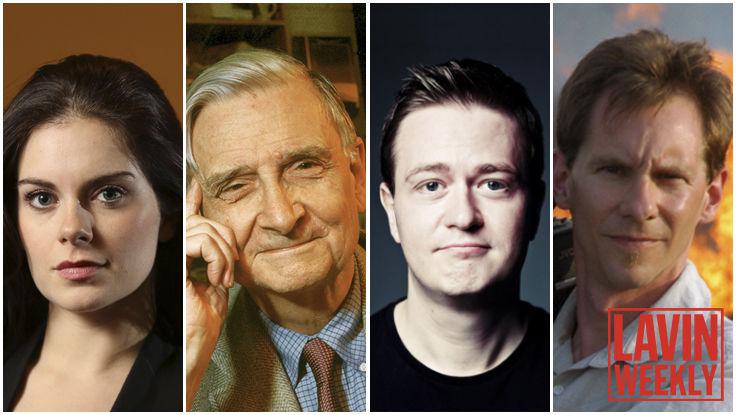 Last week, Toronto was rocked by the death of embattled and often controversial ex-mayor Rob Ford. In this week’s Globe and Mail, investigative journalist Robyn Doolittle—who helped break Ford’s crack cocaine scandal in 2013—muses on her complex relationship with Ford: the man, the politician, the enigma. Doolittle looks back on her dealings with Ford, from her beginnings as a fledgling city hall beat reporter with the Toronto Star to her current standing as an established force with The Globe. To Doolittle, Ford’s legacy constitutes “a lesson for the political class. Voters feel so unheard and ignored that they’re willing to overlook almost anything for a leader that they believe cares and will listen to them.” As she remembers the man on whom she has written so extensively, including in her bestselling book Crazy Town, Doolittle wields the same insightful voice that shines through in her keynotes.

Renowned Harvard biologist and father of modern environmentalism Edward O. Wilson has a plan to save the world. In a new interview with National Geographic, Wilson lays out his “half-Earth” strategy: by setting aside 50 percent of the planet’s surface for conservation purposes, we could save between 80 and 90 percent of all species. Combating today’s fatalistic, humanity-as-juggernaut rhetoric, Wilson argues that 50 percent is a surprisingly attainable number, and one that makes economic sense, to boot. In his upcoming book, Half-Earth: Our Planet’s Fight for Life—as in his rousing talks—Wilson beats back the environmental doomsayers and reminds us that our planet might not be beyond repair.

Johann Hari, twice named Amnesty International’s Journalist of the Year, has a powerful idea—that almost everything we know about addiction is wrong. Yesterday, the Los Angeles Review of Books published an interview with Hari about addiction and the failing War on Drugs. In the interview—and in his latest book, Chasing the Scream—he maps the war from its inception with 1930s Federal Bureau of Narcotics commissioner Harry Anslinger to its current state: overpopulated American supermaxes, unchecked cartels in Ciudad Juárez, and a culture of treating symptoms instead of the problem. “It’s not the drugs—it’s your cage,” says Hari, referring to environmental factors that predispose people to addiction. And he argues that legally regulating the drug market will protect addicts and reduce violent crime. As a speaker, Hari frames his compelling argument around personal experience and extensive research, challenging common perspectives on drugs, dependency, and decriminalization.

4. George Kourounis Chases His Next Storm

Everyone’s favourite storm chaser George Kourounis is returning to the small screen with a new season of Angry Planet. In his quest to document Earth’s most fearsome natural forces, Kourounis transports us from the frigid Siberian winter to polar bear territory in the Canadian tundra to sprawling cave systems in Laos. Furthermore, he explores how the floodplain of Bangladesh is producing the first large-scale wave of climate-change refugees. Far from the average ecotourist, Kourounis confronts our ever-changing biosphere head-on. Tune in to all-new episodes beginning tonight (April 1) at 7:00 p.m. ET/PT—or better yet, book George Kourounis for a thrilling multimedia keynote on his globetrotting exploits, our changing environment, and how to confront life’s many challenges.