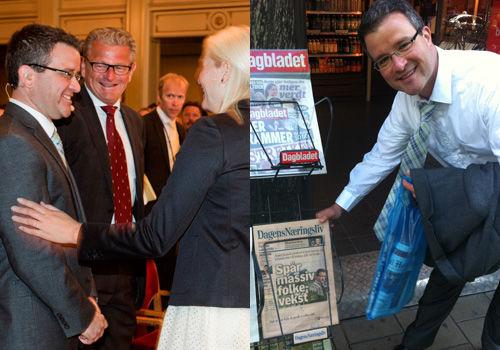 Scientist Laurence C. Smith is a bit of a celebrity in Norway—at least he's treated like one when we send him there for keynotes. Recently, Smith spoke at a Norwegian economic conference, and he ended up on the front page of the country’s biggest financial paper. Even the Crown Princess paid him a visit. There was an accompanying three-page article on Smith in the paper. Why the hoopla? Smith is a sought-after speaker who argues that, in the coming decades, the eight nations of the Arctic Rim (including Norway, Canada, and the United States) will gain in power and influence, due in no small part to fall-out from climate change. Call it “The New North.”

Laurence C. Smith teaches geology at UCLA. Some of his most famous work focuses on the fact that the melting icecaps will inadvertently mean very good things for countries in northern climates. More open waterways mean more trade routes, and more importing and exporting of goods. A stronger economy will also allow for, and benefit from, the surge in immigration that is expected with higher transport levels. In short, Smith’s keynotes combine the lessons of geography and history with state-of-the-art model projections and analytical data—and he gives northern countries a lot to be hopeful for. It’s a keynote that many groups located in the Arctic Rim are, increasingly, seeking him out for.

So, did Laurence Smith let his brief celebrity status get to his head while in Norway? Not really. Here’s an email he sent to us, after the event: “There were also several hundred Norwegian girls screaming outside my hotel. But—alas—they were waiting for Justin Bieber, not me.”