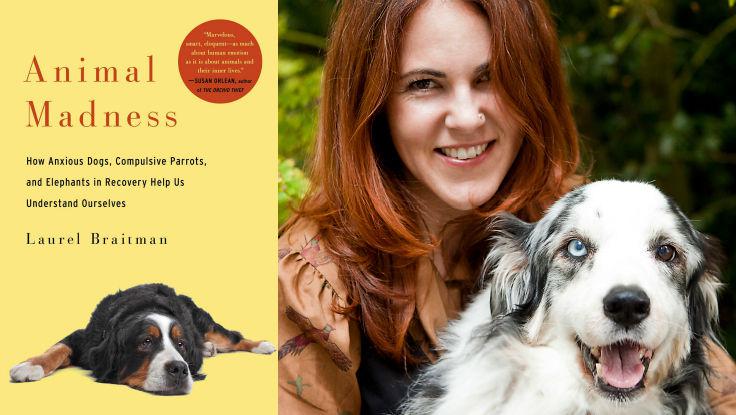 Happy Book Birthday to Laurel Braitman! Her highly anticipated book Animal Madness, which is an Amazon Best Book of the Month for June 2014, is out today. Publishers Weekly says: "[A] delightful balance of humor and poignancy...[This book's] continuous dose of hope should prove medicinal for humans and animals alike.” Braitman is a science historian studying animal emotion and behavior. Her delightful and often moving talks show us what we can learn about our own mental health by studying the mental health and behavior of animals.

For the first time, a historian of science draws evidence from across the world to show how humans and other animals are astonishingly similar when it comes to their feelings and the ways in which they lose their minds.

Charles Darwin developed his evolutionary theories by looking at physical differences in Galapagos finches and fancy pigeons. Alfred Russell Wallace investigated a range of creatures in the Malay Archipelago. Laurel Braitman got her lessons closer to home—by watching her dog. Oliver snapped at flies that only he could see, ate Ziploc bags, towels, and cartons of eggs. He suffered debilitating separation anxiety, was prone to aggression, and may even have attempted suicide. Her experience with Oliver forced Laurel to acknowledge a form of continuity between humans and other animals that, first as a biology major and later as a PhD student at MIT, she’d never been taught in school. Nonhuman animals can lose their minds. And when they do, it often looks a lot like human mental illness.

Thankfully, all of us can heal. As Laurel spent three years traveling the world in search of emotionally disturbed animals and the people who care for them, she discovered numerous stories of recovery: parrots that learn how to stop plucking their feathers, dogs that cease licking their tails raw, polar bears that stop swimming in compulsive circles, and great apes that benefit from the help of human psychiatrists. How do these animals recover? The same way we do: with love, with medicine, and above all, with the knowledge that someone understands why we suffer and what can make us feel better.

After all of the digging in the archives of museums and zoos, the years synthesizing scientific literature, and the hours observing dog parks, wildlife encounters, and amusement parks, Laurel found that understanding the emotional distress of animals can help us better understand ourselves.

To book Laurel Braitman as a speaker for your next event, contact The Lavin Agency.