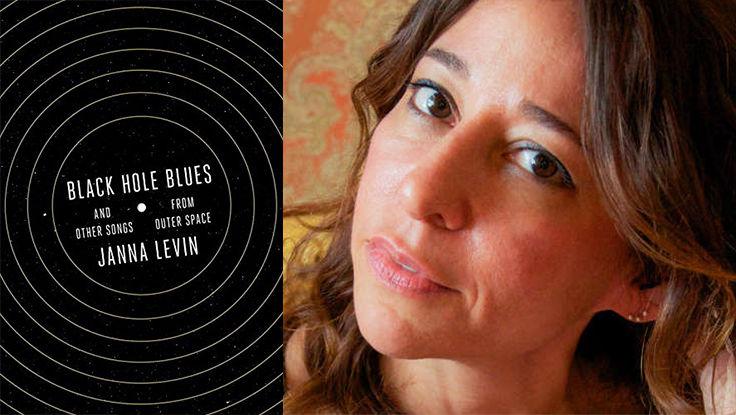 Hot on the heels of the astounding discovery of gravitational waves comes Janna Levin’s newest book, Black Hole Blues and Other Songs from Outer Space. Available on March 29, Black Hole Blues is the authoritative story of the scientific campaign to record the soundtrack of our universe, told in gripping prose by one of the world’s most gifted storytellers and theoretical astrophysicists.

Levin’s first book How the Universe Got Its Spots was touted as “a thrilling and deeply personal communication between a scientist and the lay reader.” Her sophomore release A Madman Dreams of Turing Machines—the story of how Kurt Gödel and Alan Turing’s lives mirrored each other in surprising, even thrilling ways—captured “the zeitgeist of the era.”

Now, in Black Hole Blues, the Barnard professor, PEN/Bingham Fellowship winner, and 2012 Guggenheim Fellow offers an “absorbing account of the surprises, disappointments, achievements, and risks” of one of the most profound scientific discoveries of the decade, and of the ambitious researchers who spearheaded the painstaking work—a team that includes Kip Thorne, another of our exclusive keynote speakers, who calls the book “a beautifully written account of the quest to open the ‘gravitational-wave window’ onto our universe, and use it to explore our universe’s warped side: black holes and other phenomena made from warped spacetime. As a participant in this wonderful quest, I applaud Janna Levin for capturing so well our vision, our struggles, and the ethos and spirit of our torturous route toward success.” Yet another author and Lavin speaker, Alan Lightman, calls it “smart, hip, and resonant with the sounds of scientists at work.”

If you’ve been following the story for years—or you’re just tuning in to this headline-making hunt—Levin’s book seems the perfect companion to universe’s beautiful music. For more information on Black Hole Blues, here’s the description from the publisher, Knopf:

“Black holes are dark. That is their essence. When black holes collide, they will do so unilluminated. Yet the black hole collision is an event more powerful than any since the origin of the universe. The profusion of energy will emanate as waves in the shape of spacetime: gravitational waves. No telescope will ever record the event; instead, the only evidence would be the sound of spacetime ringing. In 1916, Einstein predicted the existence of gravitational waves, his top priority after he proposed his theory of curved spacetime. One century later, we are recording the first sounds from space, the soundtrack to accompany astronomy’s silent movie.

In Black Hole Blues and Other Songs from Outer Space, Janna Levin recounts the fascinating story of the obsessions, the aspirations, and the trials of the scientists who embarked on an arduous, fifty-year endeavor to capture these elusive waves. An experimental ambition that began as an amusing thought experiment, a mad idea, became the object of fixation for the original architects—Rai Weiss, Kip Thorne, and Ron Drever. Striving to make the ambition a reality, the original three gradually accumulated an international team of hundreds. As this book was written, two massive instruments of remarkably delicate sensitivity were brought to advanced capability. As the book draws to a close, five decades after the experimental ambition began, the team races to intercept a wisp of a sound with two colossal machines, hoping to succeed in time for the centenary of Einstein’s most radical idea. Janna Levin’s absorbing account of the surprises, disappointments, achievements, and risks in this unfolding story offers a portrait of modern science that is unlike anything we’ve seen before.”

For more information on booking Janna Levin as the keynote speaker of your next event, contact The Lavin Agency speakers bureau.