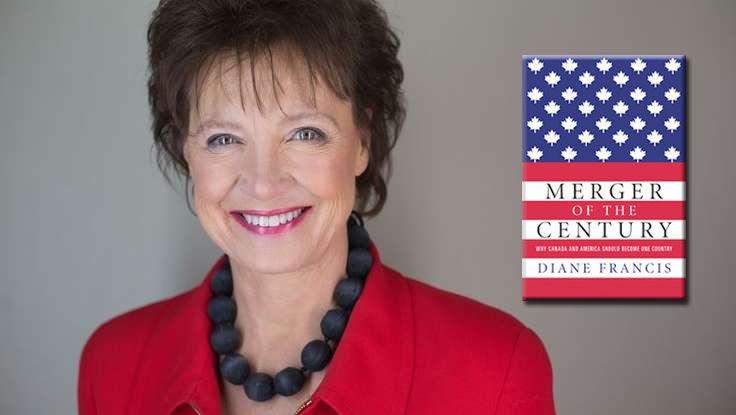 First Look: Merger of the Century, The New Book By Diane Francis

"We’ve been dating heavily for generations," politics speaker Diane Francis writes in her new book. "So now let’s talk about common law—or even go all the way and get married.” That idea is the basis of her book, Merger of the Century: Why Canada and America Should Become One Country. Francis says that it's a thought experiment about the potential benefits of erasing the borders between the two North American countries. "The book provides a huge menu of options for both Americans and Canadians to consider," she explains on CBC's The Current. Despite admitting that a merger would be a "political nightmare," Francis says that, from a business perspective, it's an interesting idea to consider. Especially, she adds in The National Post, because "the issue of a merger between Canada and the United States has never been formally raised." If the two countries want to remain competitive in the future, they have to start examining different options. As Francis suggests, some sort of merger between Canada and the United States could be the solution.

The book will be available for public sale on October 1. Until then, check out the synopsis below, and, keep checking back at The Lavin Daily for updates.

No two nations in the world are as integrated, economically and socially, as are the United States and Canada. We share geography, values and the largest unprotected border in the world. Regardless of this close friendship, our two countries are on a slow-motion collision course—with each other and with the rest of the world. While we wrestle with internal political gridlock and fiscal challenges and clash over border problems, the economies of the larger world change and flourish. Emerging economies sailed through the financial meltdown of 2008. The International Monetary Fund forecasts that by 2018, China’s economy will be bigger than that of the United States; when combined with India, Japan and the four Asian Tigers—South Korea, Taiwan, Singapore and Hong Kong—China’s economy will be bigger than that of the G8 (minus Japan).

Rather than continuing on this road to mutual decline, our two nations should chart a new course. Bestselling author Diane Francis proposes a simple and obvious solution: What if the United States and Canada merged into one country? The most audacious initiative since the Louisiana Purchase would solve the biggest problems each country expects to face: the U.S.’s national security threats and declining living standards; and Canada’s difficulty controlling and developing its huge landmass, stemming from a lack of capital, workers, technology and military might. Merger of the Century builds both a strong political argument and a compelling business case, treating our two countries not only as sovereign entities but as merging companies.We stand on the cusp of a new world order. Together, by marshaling resources and combining efforts, Canada and America have a greater chance of succeeding. As separate nations, the future is in much greater doubt indeed.