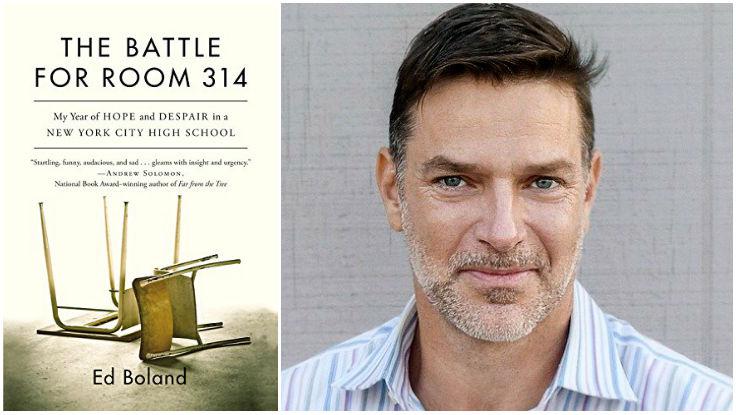 New Lavin speaker Ed Boland’s memoir The Battle for Room 314: My Year of Hope and Despair in a New York City High School drops from Hachette this February 9th—and it’s turning into a must-read for anyone invested in the state of education in the US. “By turns harrowing and hilarious,” writes Piper Kerman, author of Orange Is the New Black, ”Ed Boland's memoir about teaching in a New York City high school is raw, moving, and smashes the dangerous myth of the hero-teacher. The story told in The Battle for Room 314 shows us how high the stakes are for our most vulnerable students, and offers a fresh view and a pointed and powerful first-person perspective on American public education.”

Reviews are already rolling in that celebrate Boland’s fierce honesty and insightful commentary. “By turns hilarious and heartbreaking,” writes Publishers Weekly, “Boland’s memoir is a deeply human story about the power of teaching.” Kirkus Reviews is calling it “an unflinchingly honest account of one man’s experiences with inner-city education.” The New York Post finds it “riveting ... There’s nothing dry or academic here. It’s tragedy and farce, an economic and societal indictment of a system that seems broken beyond repair.” And to James E. Ryan, Dean of the Harvard Graduate School of Education, the memoir is “a humbling reminder that no teacher is an island, and that schools, systems, and communities all share a responsibility to ensure that every child has access to a quality education.”

“Until this memoir, I‘d never written a thing in my life,” says Ed Boland in a recent interview. ”I suppose that tells you how urgently I needed to reflect on my experience as a failed teacher. What started as a personally cathartic exercise ended up as a very public statement about the children in our schools whose lives are so hobbled by poverty.” Indeed, it’s poverty—and associated issues of mass incarceration, drug policy, immigration, and America’s segregated, two-tiered education system—that are the real subjects of Boland’s work. Both his book and his keynotes are much-needed ways to move the education debate from the micro to the macro, and dispell the myth of the Hollywood-styled classroom, all by using a few under-recognized ideas.
For more information on The Battle for Room 314, we’ll now turn to the publisher:

In a fit of idealism, Ed Boland left a twenty-year career as a non-profit executive to teach in a tough New York City public high school. But his hopes quickly collided headlong with the appalling reality of his students’ lives and a hobbled education system unable to help them: Freddy runs a drug ring for his incarcerated brother; Nee-cole is homeschooled on the subway by her brilliant homeless mother; and Byron’s Ivy League dream is dashed because he is undocumented.

In the end, Boland isn’t hoisted on his students’ shoulders and no one passes AP anything. This is no urban fairy tale of at-risk kids saved by a Hollywood hero, but a searing indictment of schools that claim to be progressive but still fail their students. Told with compassion, humor, and a keen eye, Boland's story is sure to ignite debate about the future of American education and attempts to reform it.