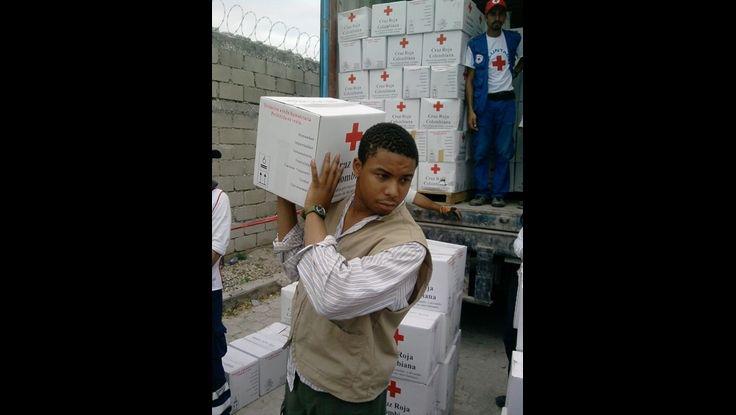 "Everyone Was on a Mission": Social Change Speaker Happy Johnson Helps Rebuild Haiti

Social change speaker Happy Johnson first came to prominence with Blanket New Orleans — a unique relief effort he started during the terrifying aftermath of Hurricane Katrina. In those chaotic post-Katrina days, Happy also pitched in by driving an Emergency Response Vehicle; anything he could do to help. Though he’s still active in New Orleans, Happy has continued his humanitarian project elsewhere. In 2010, he travelled to Port au Prince, shortly after the earthquake, to start Blanket Haiti. The photograph above is from his first trip to Haiti, in February 2010. I asked him for his thoughts on the photo — on that time in general — and here’s what he wrote, an eloquent, stirring, and ultimately hopeful passage about a difficult time:


I remember this moment in February, 2010. It was a day of extreme challenge. It was difficult to separate my days and nights while in Port-au-Prince, Haiti, because my time there felt like one eternally long day. Eventually, pure exhaustion settled my mind to rest. But for the most part, my mornings began with remnants from the night before. I did not sleep well. It was my first international humanitarian journey. Bedtime was spent on a concrete slab, cardboard sheets and blankets – along with a family of thirty inside a large makeshift tent. The chill of nightfall and dank winds would often sneak in.

The indoor bathroom was a communal five-gallon bucket. And while falling asleep was tormenting in some regards, I was refreshed every morning by a chorus of little angels. I do not speak Creole but I could feel what those children were singing: “Haiti! Haiti! Transform tragedy into triumph. Every day is a new day. Sing grateful, the joys of life.”

Often, I left our tent empowered and with a robust sense of purpose. I truly enjoyed the gifts of song from the children. Neglect and displacement are no strangers to me because of my childhood living in foster care and, so, emotionally, I could empathize with their situation. Departing the tent, I was ready to learn from and assist a culturally rich Caribbean capital. In essence, I was ready to rebuild.

Our organizational lead directed me to the Haitian Red Cross base camp to volunteer. He speaks Creole, French, Spanish and English and has a phenomenally innate sense of how to maneuver bureaucracy in order to survive. An hour later, I find myself standing on the bed of a moving diesel truck, like caged cattle, with disaster response volunteers from around the world. There were no spoken words, no introductions or complaints. Everyone was on a mission.

As we arrive to the point of distribution, I witness a sea of human beings from atop the diesel truck as peer over a barbed-wire fence. There were massive crowds inside a temporary camp clamoring toward the entrance to obtain food assistance. Our unit joined a much larger team on the ground. We may have had 100 volunteers but at this camp there were thousands of Haitians who had been neglected, both historically and in the aftermath of the January 2010 earthquake.

My immediate thought was: this is going to be unlike anything I anticipated. It took our team leaders two hours after arrival to maintain order because we were faced with unparalleled levels of chaos and anxiety. On this day in Port Au Prince, our capacity was 3,000 boxes of rice; 3,000 ready to eat meals and 20,000 bottles of water. It was a Herculean task. This photo was taken by our organizational lead as we provided boxes of rice until the supply was emptied. It accurately captures the drive and lethargy I was feeling by daybreak. Furthermore, I’m not sure how to honestly articulate the rest of this experience or how to convey how much I valued being a part of the humanitarian effort. But this much I know: “Haiti! Haiti! Transform tragedy into triumph. Every day is a new day. Sing grateful, the joys of life.” Everyone can do their part.