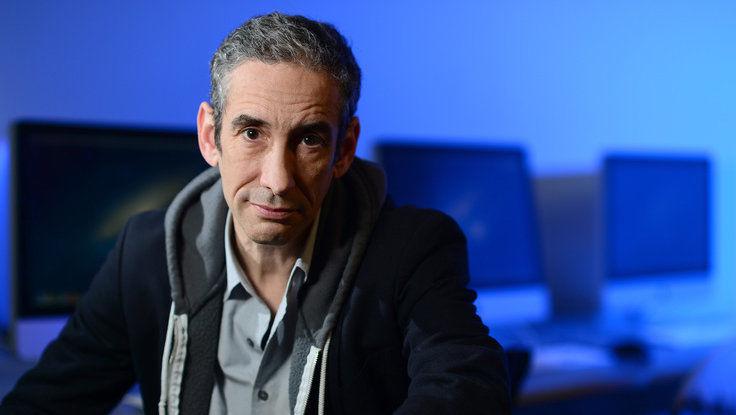 On Thursday, March 10, we were joined by media theorist, documentarian, and world-renowned public intellectual Douglas Rushkoff for our 10th #AskASpeaker Q&A on Twitter. Rushkoff’s the author of numerous groundbreaking books, including Present Shock, Program or Be Programmed, and Life Inc., but if you haven’t read him, you’ve probably quoted him: he’s coined such concepts as “viral media,” “social currency,” and “digital natives.” But our half-hour chat on Thursday was all about his new book, Throwing Rocks at the Google Bus: How Growth Became the Enemy of Prosperity—a book The Financial Times calls “a brilliant, bomb-hurling critique of the flaws in our digital economy, identifying what has gone wrong and what can be done about it.”

In Throwing Rocks, Rushkoff describes how our current economic operating system is broken. Rather than provide greater prosperity for all, the digital economy has meant fewer jobs, gutted neighborhoods, instability, and less power for most of us. However, Rushkoff argues, it doesn’t have to be this way. Instead of embracing a ‘growth above all’ mentality, with endless extractive expansion and platform monopolies, we can reprogram the economy from the inside out. By harnessing the distributive power of the net, exchanging value and investing in each other—think Kickstarter, not Uber—we can reboot, grow, and prosper.

For his arresting visions on how new media and technology are impacting culture, business, and the economy, Rushkoff was named one of the world’s 10 most influential thinkers by MIT. And in new keynotes, based on the theories outlined in Throwing Rocks, he offers a series of practical steps for businesses, consumers, investors, and policymakers to remake the economy—and prosper along the way. If you’re looking for someone in touch with how innovation, economics, and digital and social media intersect and interact with popular culture, then Douglas Rushkoff is a must-see.

Read the following Storify transcript to catch up with our live chat, and keep up with Rushkoff’s appearances, articles, and new projects by following @rushkoff on Twitter—and be sure to follow @TheLavinAgency, while you’re at it. Now, we’re also excited to announce our 11th guest: cosmologist Janna Levin! We’ll be chatting live at 1 p.m. EST on Thursday, March 31—the launch date of her new book, Black Hole Blues and Other Songs from Outer Space! It promises to be a fascinating account of the surprises, disappointments, achievements, and risks of the recent discovery of gravitational waves, and a uniquely compelling and intimate portrait of the people and processes of modern science.

For more information on booking Douglas Rushkoff as the keynote speaker of your next event, contact The Lavin Agency speakers bureau.