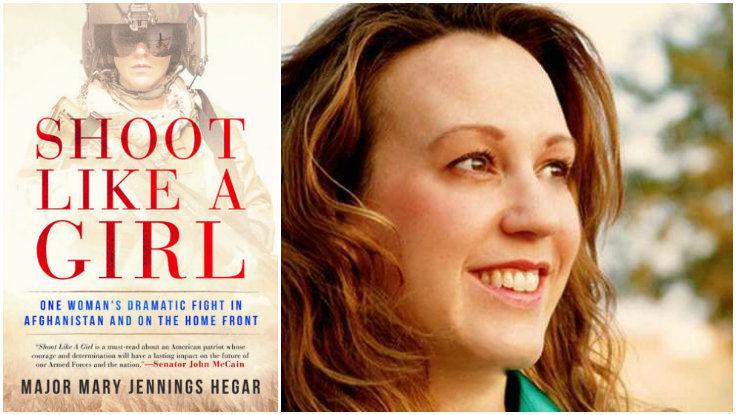 Major news! Angelina Jolie is in talks to star in the upcoming film Shoot Like a Girl: the big-screen adaptation of Lavin speaker Maj. MJ Hegar’s memoir of the same name.

“The actress and filmmaker is in talks to star in Shoot Like a Girl, an adaptation of Air Force Maj. Mary Jennings Hegar’s upcoming memoir ... The TriStar film will chronicle Hegar’s accomplishments both on the battlefield, where she served three tours of duty in Afghanistan as an elite rescue pilot and earned a Purple Heart, and at home, where she helped end the Pentagon’s ban on women serving in direct combat jobs.”

While no date’s been set for the film, the inspiring memoir is on its way. Slated for publication in March 2017, Hegar’s book Shoot Like a Girl: One Woman’s Dramatic Fight in Afghanistan and on the Home Front covers her search-and-rescue missions in Afghanistan (winning her the Purple Heart Distinguished Flying Cross with Valor Device). It also documents her heroic efforts to “eliminate the military’s Ground Combat Exclusion Policy, which kept female armed service members from officially serving in combat roles despite their long-standing record of doing so with honor.”

A powerful speaker on leadership, thriving under pressure, resiliency, and having the courage to stand fast to your beliefs, MJ Hegar is a real-life hero who helps us be the people we want to be when all eyes are on us. Let’s hope Angelina Jolie does the role justice!

To book leadership speaker MJ Hegar for your next conference or event, get in touch with us today.