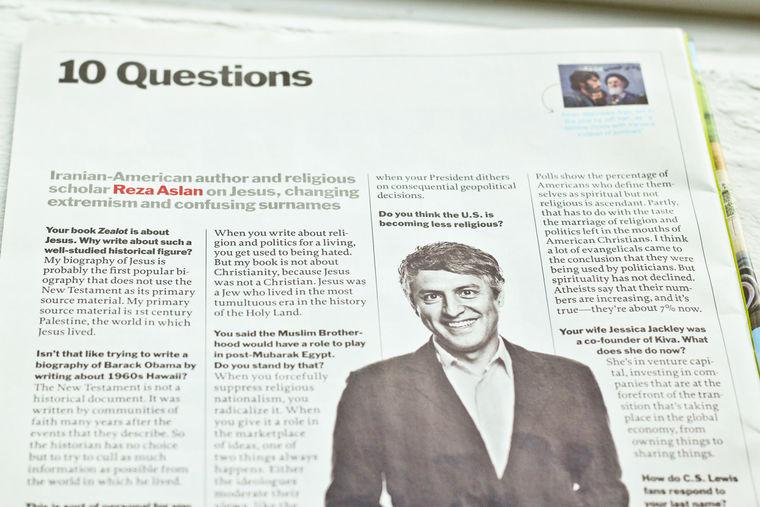 As the Huffington Post writes, Reza Aslan "became an Internet hero last week for his deadpan demeanor and nerves of steel." He earned that title after enduring a Fox News interview that went off the rails. The author of the new book Zealot (which shot to #1 on Amazon and debuted at #4 on the New York Times bestseller list) has seen his already busy interview schedule double since that media appearance. He was featured in New York Magazine and The New York Times this week, participated in an Ask Me Anything interview on Reddit, and was interviewed in TIME's August issue. (All of the aforementioned appearances were notably more thoughtful and informative than last week's Fox News interview.)

In TIME, the religions scholar answered 10 questions on the contents of his new book and religion more generally. When asked why he chose to write a biography about Jesus, Aslan replied that his work "is probably the first popular biography that does not use the New Testament as its primary source material." By focusing on 1st century Palestine as reference material, Aslan crafted a unique analysis of the infamous figure. Zealot gives readers fresh insight about a man who has been profiled many times over. He also mentions that he converted to Christianity himself for a time, preaching the Gospel to friends and family. Amidst the heavy subject matter, Aslan proves he also has quite the sense of humor. He made a quip about the notoriety he's gained from having the same name as a character in The Chronicles of Narnia, and, provides a well-received punchline during his Reddit interview. The response to Zealot—and to Aslan's rapport with the media since its release—has been overwhelmingly positive. Overall, “I hope that people recognize that your faith, as Jesus said, is supposed to be built on a rock, not on sand,” he tells The New York Times. “I guess my message is: Relax.”

Reza Aslan is a professor, public speaker, bestselling author, and scholar with four degrees in religious study. With few peers, he presents the often contentious and hotly debated religious issues of the day with authority and eloquence. When presenting his keynote speeches, Aslan is articulate and informative—providing audiences with the tools to bridge gaps in understanding and achieve a more holistic understanding of the world.